Mapping the Battle Against ISIS in Deir Ezzor 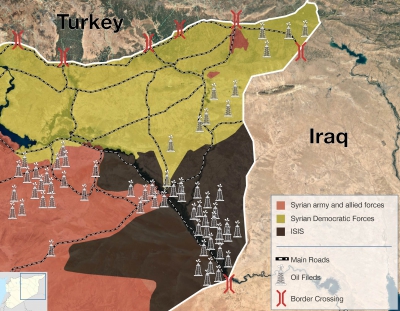 In recent weeks, the so-called Islamic State has suffered a string of defeats in eastern Syria. It has lost swaths of territory in Deir Ezzor city to advancing pro-Syrian government forces and has been driven from villages and oil fields on the eastern banks of the Euphrates River by a U.S.-backed paramilitary group.

The two simultaneous but separate offensives by the Syrian Democratic Forces (SDF) and Syrian government loyalists may have resulted in quick gains in their first few weeks, but fighting is ongoing in many parts of the province, much of which remains under complete militant control.

ISIS still controls roughly 74 percent of the Deir Ezzor province and commands two main strongholds in the areas of Boukamal and Mayadin, south of the provincial capital. The group also controls a resource-rich region east of the Euphrates River that contains most of the oil and gas fields in the province.

With a long and grueling campaign still underway to expel the militant group from its last bastion in Syria, Syria Deeply examines the battle for Deir Ezzor by looking at the main groups, their objectives and their advances in the region.

Who Is Fighting in Deir Ezzor

Syrian government loyalists are the main fighting force in Deir Ezzor city and the surrounding countryside. Their forces consist of two specialized Syrian army divisions: the Republican Guard and the 17th Reserve Division, which is responsible for northern and eastern Syria.

A number of pro-government militias are assisting, including the Baath Battalions, a Syrian paramilitary group that fought rebels in Aleppo province last year. The Galilee Forces (a Palestinian militia), the National Defense Forces(one of the largest pro-government militias operating in Syria), and the Syrian al-Qassam group’s elite forces.

The Lebanese Hezbollah and a number of other Iran-backed groups are also fighting alongside the Syrian army in Deir Ezzor, as are a number of local tribes, most notably the al-Shaitat tribe. Russian warplanes are providing aerial cover for pro-government advances, and Moscow announced on Thursday that it has deployed special forces to assist the Syrian army. 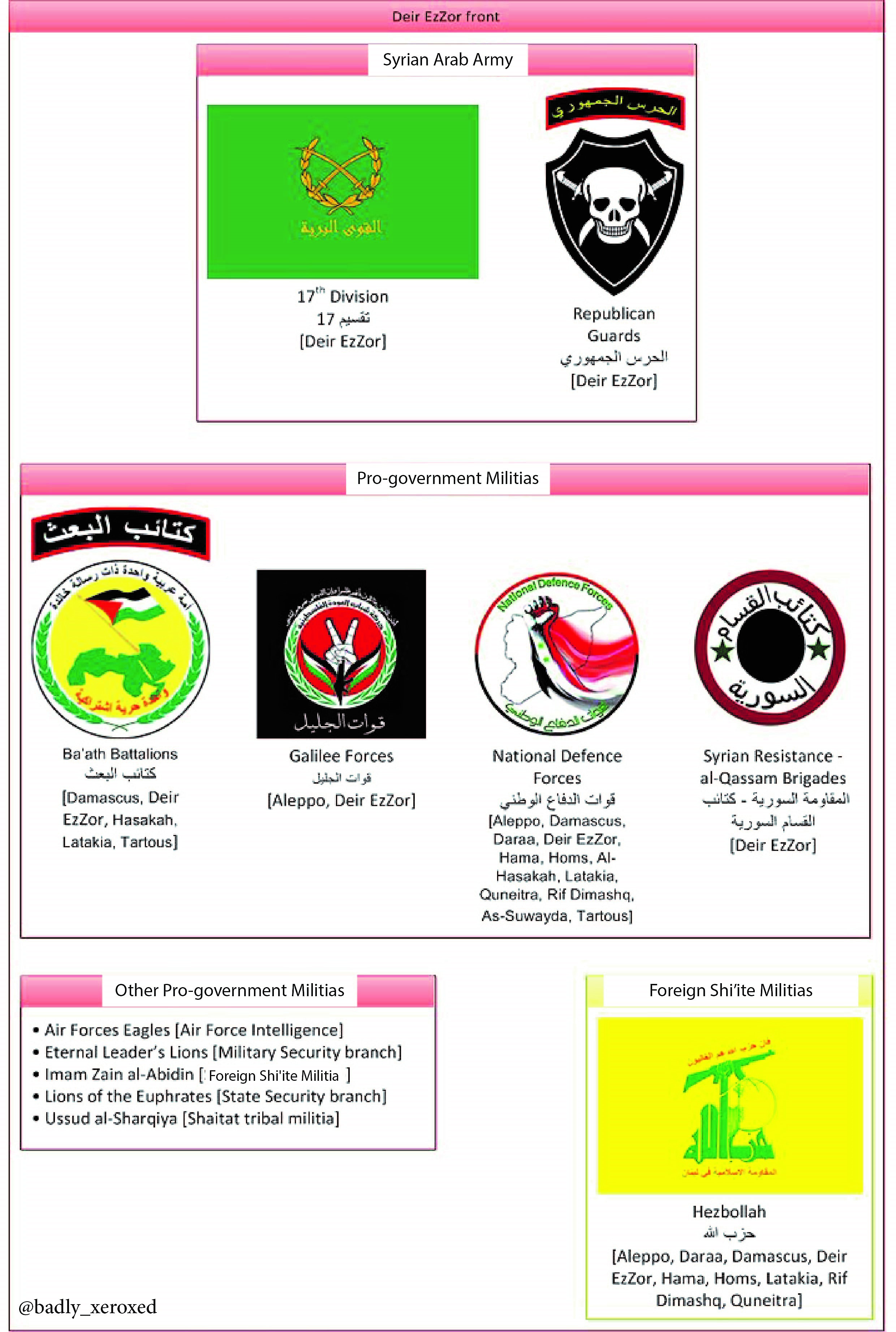 Infographic breaking down the multiple groups fighting alongside the Syrian army in Deir Ezzor. (Nawar Oliver)

On the eastern banks of the Euphrates River, a contingent of the U.S.-backed Syrian Democratic Forces, known as the Deir Ezzor military council, is also fighting ISIS. It is supported by U.S.-led coalition warplanes and U.S. special forces embedded within its ranks. The Deir Ezzor military council is made up mostly of Arab fighters from Deir Ezzor, but is supported by Kurdish fighters of the SDF.

The Race for Deir Ezzor

Although the SDF and the Syrian government have framed their respective operations in Deir Ezzor as primarily a battle against ISIS, each side has other objectives.

For the Syrian government, recapturing Deir Ezzor has been a main priority since the start of 2017, and gaining complete control over Deir Ezzor city, the largest city in eastern Syria, would be a symbolic victory.

Control over the oil-rich region on the southeastern flanks of Deir Ezzor province would also secure key natural resource revenues for the Syrian government.

The province is located along part of Syria’s border with Iraq, so controlling the area would help the government reassert its authority over the quasi-totality of its frontier with its southeastern neighbor. Increased government influence in Deir Ezzor would also help Iran secure a land bridge between Iraq and Syria, especially via the city of Mayadin, which provides a land route from Damascus to Iraq.

The government’s push in Deir Ezzor is also aimed at preventing a Raqqa scenario. In other words, the Syrian government is trying to keep U.S.-backed forces in Syria from carving out a zone of influence in the eastern province after ISIS withdraws.

For the SDF and its primary backer, Washington, the battle for Deir Ezzor is largely posturing against Assad’s forces. The group announced its operation in Deir Ezzor only days after pro-government forces breached ISIS’ siege on parts of the city, signaling to the government that its advance in the province would not go uncontested.

Although the SDF has said it would not enter Deir Ezzor city and would leave the area to pro-government forces, the group is seeking to expand its influence in the oil-rich parts of the province on the eastern banks of the Euphrates and in ISIS strongholds near the border with Iraq. This push is driven by Washington’s aim to secure the Iraqi border and prevent Iran from gaining a foothold in the region.

In recent weeks, pro-government forces have pushed into Deir Ezzor city from the west, along the al-Sukhna-Deir Ezzor highway, and achieved significant territorial victories in the provincial capital and its countryside. They have pushed ISIS militants back from areas around a military garrison known as Brigade 137, have breached a three-year siege of Deir Ezzor’s military airbase and a number of adjacent neighborhoods, and have also secured the strategic Deir Ezzor-Damascus highway. 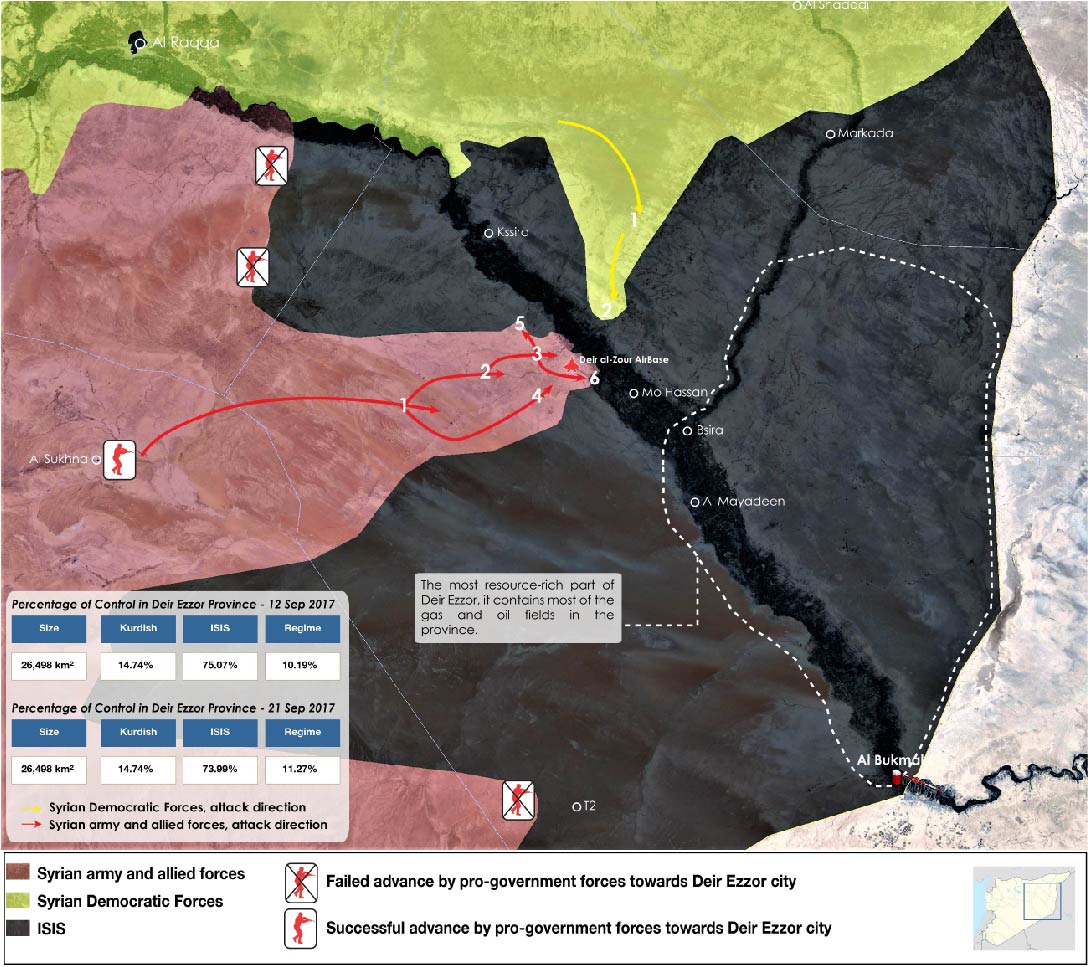 Map of control for Deir Ezzor province that also shows advances by pro-government forces and the SDF. (Nawar Oliver)

The Syrian army said over the weekend that its forces have captured at least 44 villages and towns since launching the assault on Deir Ezzor earlier this month. According to the Syria Observatory for Human Rights (SOHR), pro-government forces control roughly 64.3 percent of the provincial capital, while ISIS militants control 35.7 percent. Russia’s Defense Ministry, however, said last week that pro-government forces are in control of at least 85 percent.

They have also made significant gains on the western banks of the Euphrates, in Deir Ezzor’s northwestern countryside, where they have captured more than 60 miles (100km) of former ISIS territory, the SOHR said last week.

Pro-government forces also crossed into the eastern bank of the Euphrates last week, reaching within 3 miles (5km) of SDF-held positions.

The government’s advance suggests three short-term objectives. By expanding control on the western and eastern banks of the Euphrates, the Syrian government is trying to seal the eastern and western gateways to the city, thereby besieging ISIS in a pocket in the provincial capital.

It is also trying to complicate SDF advances in the region by preventing the group from reaching ISIS positions on the western axis while also blocking any potential SDF push down the east bank of the Euphrates.

The advance on the eastern banks of the Euphrates is also driven by an attempt to secure oil and gas fields in the area, most notably the al-Omar oil field, Syria’s largest and most lucrative field.

Current advances, however, do not signal an imminent push south toward ISIS strongholds in Boukamal and Mayadin. It would appear then that the real battle in ISIS’ best-fortified stronghold is delayed.

Over the past two weeks, the SDF has pushed into Deir Ezzor province from the northeast using the Hassakeh-Deir Ezzor Highway, gaining full control of Deir Ezzor’s industrial zone and capturing a major gas field in the area.

The Conoco gas plant, Syria’s largest, came under full SDF control on Saturday, after days of fighting ISIS militants in the area. The plant had the largest capacity of any in Syria prior to the conflict, producing up to 459 million cubic feet (13 million cubic meters) of natural gas a day. 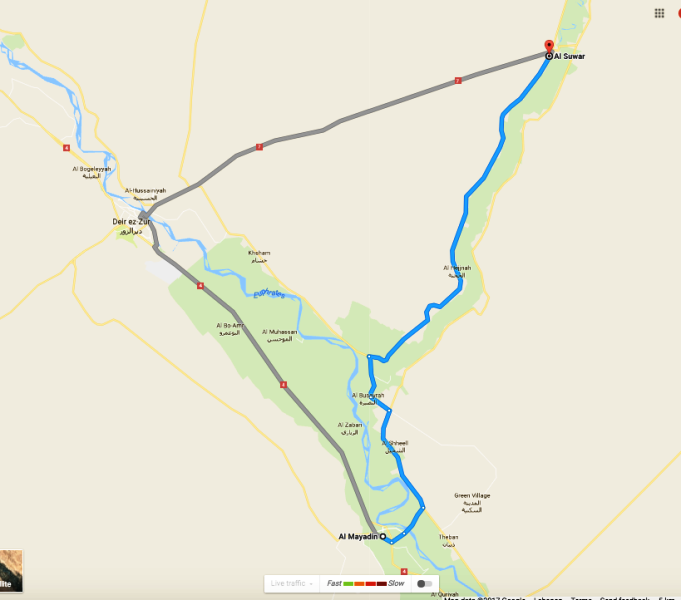 SDF forces are now moving away from Deir Ezzor city and advancing toward the Iraqi border. On Sunday, the push to capture the town of al-Suwar began, according to the SOHR. The area is a strategic junction which provides land and supply routes connecting SDF positions to ISIS strongholds in Boukamal and Mayadin. A coalition spokesman said over the weekend that these two ISIS strongholds, some 50 miles (80km) west of the Iraqi border, are the SDF’s eventual goal.

The race for gas and oil fields in the eastern banks of the Euphrates has increased tensions between Russia, the U.S. and their respective allies over resource-rich parts of Deir Ezzor.

The SDF said on Monday that Russian warplanes bombed their positions in the Conoco gas field, killing one SDF fighter and wounding two others, just two days after the U.S.-backed forces captured the area.

“The death of the Russian commander is the price, the bloody price, for two-faced American policy in Syria,” Russian deputy foreign minister Sergei Ryabkov said. “The American side declares that it is interested in the elimination of [ISIS] … but some of its actions show it is doing the opposite and that some political and geopolitical goals are more important for Washington.”

This is not the first time that the two sides have traded jabs over attacks in east Syria. Earlier this month, the SDF and the Pentagon accused Russia of shelling an SDF position in Deir Ezzor’s industrial zone. Last week, Russia said that it would target SDF positions in east Syria if pro-government forces come under fire from the group.

Moscow’s warning came after Russia accused the SDF of opening fire on Syrian troops and allied forces on the eastern bank of the Euphrates twice last week. Moscow has also accused the SDF of hindering government advances in the area by opening upstream dams to prevent its allies from crossing.

In an attempt to prevent an outbreak of clashes, U.S. and Russian generals held a face-to-face meeting to discuss operations in Deir Ezzor last week.

“The discussions emphasized the need to share operational graphics and locations to ensure … prevention of accidental targeting or other possible frictions that would distract from the defeat of ISIS,” Col. Ryan Dillon said.

Monday’s attack undermines earlier talks and signals that the U.S. and Russia have yet to reach an agreement over the oil-rich zone coveted by all sides. With Monday’s attacks, it would seem that oil-rich areas east of the Euphrates will serve as a testing ground for U.S. and Russian de-confliction arrangements.

If the two sides fail to delineate areas of respective control then sporadic fighting will continue to obstruct the campaign against ISIS in the area and will leave both sides vulnerable to militant counterattacks.