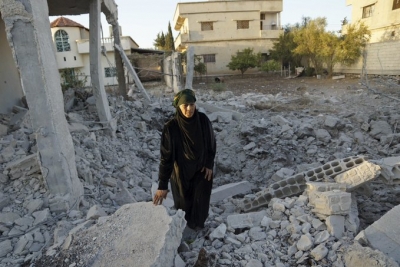 In a symbolic blow to the anti-government uprising born in Daraa in 2011, the Bashar al-Assad regime and Iran-backed militias are once again attempting to violently subdue the Syrian provincial capital, which is considered the birthplace of the revolution that began a decade ago.

The most recent round of clashes was sparked by Syria’s May 31 illegitimate presidential elections. Several of Daraa province’s cities refused to participate in the elections and civilians took to the streets in protest.

On the day of the elections, the Syrian regime was forced to move the election center from the Baath Party Division building in Nawa city to the district center in the middle of the security square, where branches of the regime security agencies are located. This prompted the flight of most of the working members of the party’s division to the capital, Damascus, for fear of being targeted.

As a result, several neighborhoods in Daraa province were placed under a brutal siege. In late June, the Fourth Division of the Syrian army and other regime forces encircled the city and cut off all roads leading to Daraa al-Balad in the south, preventing the entry of food and medicine as well as the entry or exit of civilians. The regime and its allies proceeded to cut off electricity, water, and communications. One checkpoint remains open for residents, but it is under the control of the Military Security Branch and the Mustafa al-Kassem militia—a troubling scenario for civilians.

Daraa hasn’t witnessed a military campaign like this since the regime took control of the province in July 2018. Following that takeover, the region was divided into settlement areas, as happened in Daraa al-Balad, Busra al-Sham, Tafas, and other areas under regime control (MAP 1). Members of the Free Syrian Army (FSA) remained, forming sleeper cells, such as the Popular Resistance in the south—an armed group from Daraa province that was formed in November 2018—in several towns that refused the terms of a settlement with the regime, which exposed them to attacks. Other formations of the FSA joined the Fifth Corps—a volunteer-based force—under direct Russian control. The most prominent outgrowth was the Sunni Youth Forces, which now forms the forces of the Eighth Brigade in the Fifth Corps. 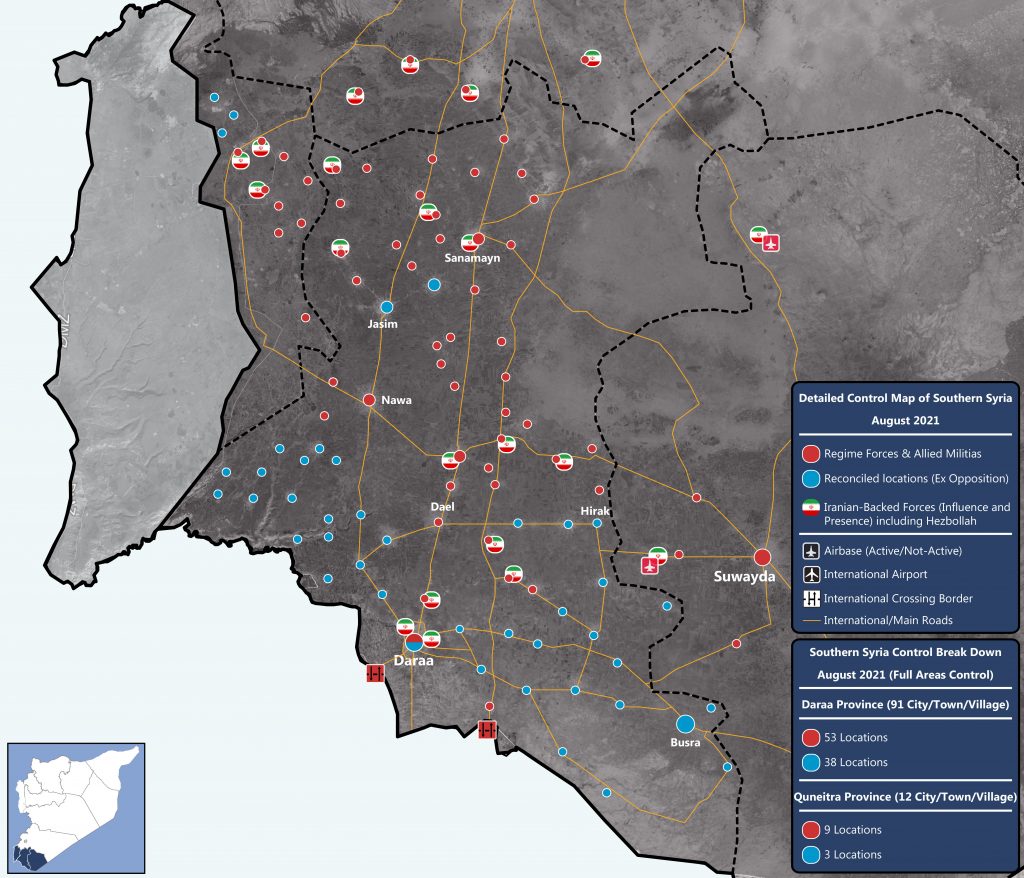 The complex reality of influence and control after the 2018 settlement

Despite the Assad regime’s control over Daraa since the 2018 settlement, the reality on the ground indicates that there are three spheres of influence in the province. The first is the area considered the center of negotiations between the opposition and regime, which is under direct Russian supervision. In this area, the regime maintained institutional control but was denied a security presence. The second sphere of influence comprises of settlements where the regime has all-out military control, such as Bosra al-Harir, al-Harak, Saida, and surrounding towns, as well as western areas like Jassem and Newa. Lastly, the third includes areas seized by the regime without signing a settlement agreement, such as Dael, Inkhil, and al-Hara.

Iran’s consolidation of influence in Daraa is one significant implication of this power diffusion. Via the Fourth Division, the Islamic Revolutionary Guard Corps, and militias deployed in Daraa, Iran has successfully expanded its influence in the south and established a military presence in strategic locations near Syria’s southern border. Recent developments are further evidence of Russia’s failure to contain Iran in Daraa. While the Russians led the initial negotiations, Iran subsequently upended the process, empowering local allies to take military control of the province.

Beginning on June 25, regime forces imposed a complete siege on the neighborhoods of Daraa al-Balad (inhabited by approximately fifty thousand people): the internally displaced camp, Palestinian refugee camp, al-Sad Road, and the farms in the areas of Shiah, al-Nakhla, al-Rahiya, and al-Khawani. The siege is meant to punish civilians for ongoing demonstrations since 2018 and the refusal of Dara al-Balad residents to participate in the voting process. As the dispute escalated, the Central Committee of Daraa al-Balad met with Russian General Assad Allah, who threatened to storm dissenting neighborhoods but agreed to prevent Iran-backed forces from taking military action in the city.

After several meetings between the Central Committee and regime, the two parties agreed to hand over the remaining light weapons of former FSA fighters who are not part of the Fifth Corps in exchange for lifting the siege imposed on Daraa al-Balad and an end to the regime’s military campaign there. The two sides also agreed to construct a new settlement to clarify missing or gray areas in the 2018 settlement.

However, the agreement has not been implemented so far due to several obstacles created by Major General Husam Louka, the head of General Security Directorate, Brigadier General Ghaith Dalah, commander of the Fourth Division, and Syrian Defense Minister Ali Ayoub—all of whom have stated that the regime’s goal is absolute control over the entire neighborhood of Daraa al-Balad. This proclamation upset the Russians, who know Iran is escalating the conflict and attempting to strengthen the control of its local allies near the Syrian and Jordanian borders.

It is possible to deduce several important points from the rapid developments in Daraa al-Balad during the past week:

Amidst this military escalation on Daraa al-Balad and the eastern and western countryside and the continuation of negotiations between the Central Committee and the regime, Daraa faces several scenarios.

A new settlement and forced displacement

The way the Assad regime dealt with the cities of Tafas and al-Sanamayn could foreshadow what happens in Daraa al-Balad in the coming days. After the regime attack on the city of al- Sanamayn in March, Russia intervened through the Fifth Corps to resolve the conflict and imposed a truce that ended with the deportation of fighters to the north; those who stayed have had to hand over weapons. In January, the same scenario occurred in Tafas, after the regime demanded that the people hand over light and medium weapons and that those who wished to leave Daraa go north.

According to this scenario, Russia may intervene to end the attack on Daraa al-Balad, put an end to the military operation, and sign a new agreement. However, the details and terms depend on the size of the Assad regime’s losses in the coming days. This seems to be the most realistic scenario for the regime, considering its accelerated losses and negotiations with the Central Committee of Daraa.

The area under the shadow of the Fifth Corps

The FSA’s recent success will give it an upper hand at the negotiating table. The Central Committee may negotiate a stop to the escalation in all towns and cities in return for stopping the military campaign, lifting the siege, and deploying checkpoints for the Fifth Corps in Daraa. Although this scenario is possible, it requires the approval of Russia and Jordan and it is unlikely that Iran and the regime will accept this scenario, which would threaten their control in the south.

Return to the 2018 settlement

If the Russians do not intervene in the coming days to stop the regime’s military campaign and the FSA continues to maintain the military escalation line and preserve its gains on the ground, the regime may turn to pre-June 25 conditions to prevent further losses and the further bolstering of the opposition. The situation at the time gave the regime full administrative control over the area but with very limited security control.

Worst case scenario: absolute control by the regime without any reconciliations or settlement

This scenario is best for the Assad regime and its ally Iran, which does not favor Russia. It depends on launching a vast military campaign on the neighborhood and imposing absolute control without referring to any new settlements, which will result in a massive campaign of arrests for the residents and will not even allow them to flee to the north of Syria. This scenario is preferable for Iran because it will create a large vacuum in the region that can be exploited by local allies at the administrative, military, and security level, which will therefore pose a major challenge to Russia in regard to controlling the Iranian presence near the Syrian and Jordanian borders.

In the long run, this scenario will enhance the fragility of the security situation in the region for an array of reasons. This includes: an increase in assassinations against Iran’s allies in the region; the high incidence of clashes between members of the Eighth Brigade and Iran’s allies; and an increase in the number of Israeli attacks on Iran-backed forces. In sum, this scenario is considered the worst for Daraa and its people because it serves only Iran and its local allies from the regime.