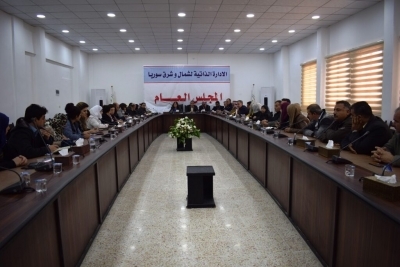 After taking control east of the Euphrates, the Autonomous Administration (AA) has endured a host of challenges, including the overcrowding of various actors and its relation with local communities.  In an effort to obtain political legitimacy, international recognition, and preserve its military gains in the field, the AA is seeking the formation of a new political framework. The proposed structure would include opposition figures and entities.

The move is motivated by a number of internal and external motives. Internally, a new, more inclusive political umbrella may unify the various Kurdish political groups. By creating an inclusive front, the AA may be able to monopolize the representation of Kurdish people in Syria, and contain local (non-Kurdish) groups. Most locals perceive the members of the PKK “Cadres” as the dominant actor behind the AA, with local governance structures existing powerlessly. This is due to the “Cadres” control over decision-making and deeply entrenched within the AA and all its institutions. Therefore, a more inclusive and representative political umbrella may alter this perception among locals.

Externally, the new AA political framework may strengthen the AA’s position to negotiate with Russia and the Syrian regime. A united front may provide the AA with a more compelling argument for the type of autonomy being proposed in northeast Syria, despite the Syrian regime’s reluctance to accept. Secondly, by restructuring, the AA may signal the gradual withdrawal of foreign PKK members from northern and eastern Syria, providing assurances to Ankara and showcasing desire to hold peace talks with Turkey. This may mend the relationship between the AA and Turkey preventing any new military operations. Lastly, through the initiative the AA would exhibit its intention to not obstruct Washington’s goals in Syria.

The initiative to form a new political umbrella east of the Euphrates may result in several scenarios. The AA will seek to adopt and improve its positioning, while mitigating potential losses.