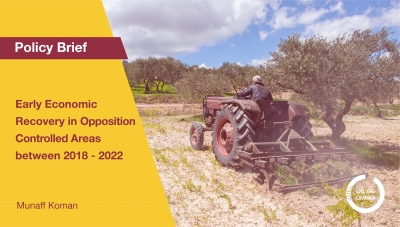 Early economic recovery aims to support local communities in returning to a stable and normal life, including preventing the community from returning to violence. The Early Recovery Report monitors projects implemented over a period of six months and is issued semi-annually, focusing on the main cities and towns in the "Euphrates Shield","Afrin" and Idlib governorate, which is witnessing remarkable economic activity, within 11 sectors which are: social services, transportation, electricity, water and sanitation, housing and construction, agriculture and livestock, finance, industry, trade, internal displacement, and communications.

The report relied on the official identifiers of local councils and organizations operating on Facebook and Telegram. The data was analyzed according to two levels, the first at the level of economic sectors, and the second by geographical level. Among the monitored areas in the countryside of Aleppo: Marea, A'zaz, al-Bab, Jarabulus, Akhtarin, Qabasin, Bza'a, Afrin, and Al Atarib. In Idlib Governorate: Idlib, Harem, Sarmada, Ma'arrat Misrin, Hazano, Salqin, Armanaz, Termanin, Atme, Al-Dana, Kah, Deir Hassan.

The report aims to analysis and understand the following:

Distribution of Projects According to Sectors

Overall, 5,024 projects were implemented in the countryside of Aleppo and Idlib between 2018 to 2022 through eleven economic sectors. The number of projects rose slowly with 338 projects in the second half of 2018 to 954 projects in the first half 2022 as shown in Figure No. (1) below.

The highest percentage of projects were implemented in the transportation sector compared to the other sectors, as shown in Figure No. (2). These projects mainly contributed to the restoration of main and secondary roads destroyed by the war. These roads were vital to connecting villages and cities and facilitating civilian movement and trade. Water, sanitation, and trade projects came in second and third with 17% each, and the internal displacement sector ranked fourth at 13%. 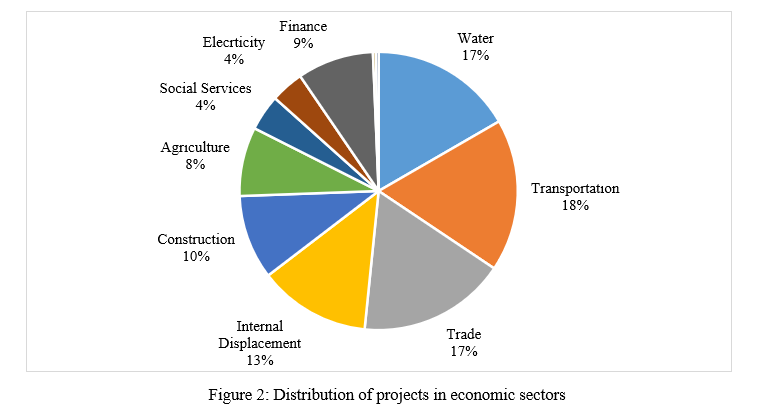 In more detail, Table No. (1) shows the sectoral survey on recovery projects during the observed period, where 891 projects were implemented in the transportation sector, 865 projects in the trade sector, followed by the water and sanitation sector with 837 projects. These projects were central to the recovery process in the region as they extended new water and sewage networks, repaired old networks, performed periodic maintenance, and repaired faults if they occur, such as paving roads, sidewalks, and commercial markets with asphalt and stone. Although these projects are still referred to as relief, they supported 1,293 camps, with a massive number of internally displaced persons, to access support and services. Projects related to construction were relatively low, around 487 projects were implemented, that included residential complexes for those displaced and the issuing of licenses for commercial and residential buildings. Agriculture projects were also lower, as farmers are reluctant to farm, there were only 403 projects during the observed period. The industrial, communications, and finance sectors are also suffering at the bottom of the index, due to the security situation and lack of investment in the region.

Distribution of Projects According to Regions

Figure No. 3 shows the distribution of projects between the countryside of Aleppo and Idlib between 2018 and 2022. The countryside of Aleppo had the largest percentage of projects with 55% about 2,757 projects were implemented in many towns and cities, most notably Azaz, Al-Bab, Afrin, Jarablus, Qabasin, Bza’a, Marea and others. The remaining 2,267 were executed in Idlib, Sarmada, Dana, Atma, Harem and others in Idlib governence. 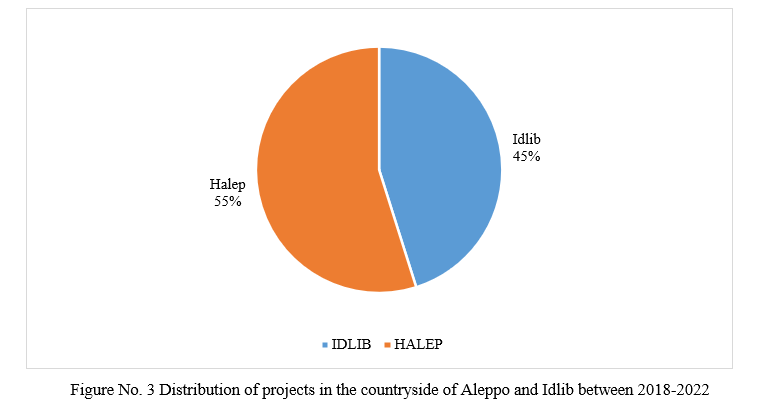 Table No. 2 shows the detailed distribution of projects at the level of towns and cities, where the city of Idlib appears at the top of the index with 669 projects, most of them in the sectors of internal displacement and trade. The city of Al-Bab, in the countryside of Aleppo ranked second with 598 projects in the sectors of housing, construction, trade, water and sanitation, and then Azaz with 475 projects in the sectors of water, transport, and electricity. A number of factors contributed to the discrepancy in the number of projects in cities and towns, including population density, displaced people and organizations, the centrality and importance of some cities before the revolution, the location of towns and cities on trade lines or near crossings, security situation, and lastly the concentration capital in some cities more than others.

Local councils and organizations have implemented important projects that pushed the early economic recovery process forward. Indicators of stability are also more apparent than before. With over four years of monitoring economic recovery activities, reports have highlighted the strengthened national negotiation papers while contracting investment companies to bring in investments. Furthermore, the industry, agriculture, communications, and finance sectors remain a significant challenge in the region’s recovery and attracting funds and investments. This is due to the lack of policies and laws necessary to enhance confidence in the local economy and products, the shortage of raw materials, high prices of raw materials, and the decline in purchasing power, in addition to the fact that the region remains trapped in relief projects.

Among the report's recommendations is to support local councils with good governance policies and implementation within each sector. This would ensure and support workflow, helping them be more attractive for investments. Support in the financial sector would revitalize the other sectors and create a comprehensive identity for the region within the agricultural and industrial sectors. As a result employment oppoturnities would increase, thus supporting residents with more jobs and a sustainabile livelihood.

السابق Resolution 2254: Feigning Consensus And Postponing the Real Problems التالي The Syrian Security Services and the Need for Structural and Functional Change