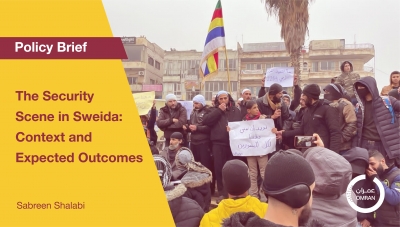 After being accused of kidnappings, the regime-backed Fajer militia experienced wide-scale hostility from local Sweida groups and had their headquarters seized. This may signal growing discontent with the Syrian regime's role in Sweida's deterioration.

Located in southwest Syria and home to over half a million people, Sweida province has become a refuge for internally displaced persons and its host population.  Sweida is predominately composed of those who identify as Druze. Their religious and ethnic identity fueled their strong inter-community tie and unified front prior to 2011. In 2011, a visible divide surfaced in Sweida between those who remained loyal to the regime, those who supported the protest, and those who wished to keep the province neutral. The Syrian regime capitalized on the growing fear, proclaiming that only the Syrian regime could protect the Druze community from the majority takeover. Although a divide in political perspective exists, the tensions between the community in Sweida subsided.

Although the formal administrative governance structures are affiliated with the Syrian regime, the community has maintained partial independence. Unwilling and unable to open another battlefront, the Syrian regime has mitigated incidents to prevent growing opposition in the Druze community. Most Druze religious leaders guided the community towards a more neutral position to maintain ties and stability. Although some in Sweida prefer to remain in opposition to the regime or neutral, there are also those that actively proclaimed their loyalty to the Syrian regime, such as the notorious colonel Issam Zaher Eddin(2) or in establishing an independent militia, such as "Fajer(3)"

Sweida's demographic composition has allowed it to retain partial independence from the Syrian regime. Given Sweida's unique ethnic, religious and political dynamics, the Syrian regime has granted it partial independence. Among the oral agreements with the Syrian regime, is the halt to military conscription. Although unannounced and not formally publicized, young men in Sweida are not forcefully detained and conscripted. This compulsory military service requirement is implemented diligently in all other regime-controlled regions. This means that men in Sweida, as long as they are confined to the province's borders, will not be actively hunted and forced to battle fronts. This does not mean the regime has not tried to pressured men from Sweida to join the military.

In negotiations with Sweida leaders, Russia, on multiple occasions, has presented the Dara'a scenario(4) to support regime military operations in the south, but the people of Sweida have been able to refuse with little repercussions. The hesitation by the Syrian regime to act directly and aggressively in the province, has also allowed citizens in opposition some freedom to express dissent. This includes protests, establishing civil society organizations, and relief non-profits.

Although Sweida is a unique situation with partial independence, Syrian regime security remains widely present. The regime supported several loyal but independent militias and fueled the intelligence apparatus, and its leader Kifah Millhem(5) to continue surveillance of the region.

Recent widespread anti-regime sentiment in Sweida province has begun to unravel. The most recent revolt occurred in July 2022, the Druze leaders called for unity and attempted to expel the regime loyal, and Iran-backed, Fajer militia after suspicion of kidnapping civilians. Several of Sweida's local military groups united in 2018 under the name "Asharayan Alawhad" to maintain security. Iran-backed forces targeted this group through assassinations.

Residents of Sweida were already facing increased pressure due to the deteriorating economic and security situation, and local armed groups decided to react to Fajer militias' latest violation. After clashes and multiple deaths, the local groups that opposed Fajer surrounded their headquarters. Although Russia attempted to intervene, local groups claimed it was an internal issue and proceeded to its intensive response to Fajer militia's actions. Such resistance by local groups in Sweida may escalate, as tensions continue to rise from the economic and security deterioration.

Negotiations are expected with Russia's help to subside the recent tensions. It is expected that the Syrian regime and Russia will intervene to decrease tensions from rising in south Syria. Similar interventions occurred during a prisoner exchange with ISIS in July 2018. Tensions rose in Sweida, as they believed the regime was purposefully exposing them to ISIS attacks. To maintain the peace, the regime completed a prisoner exchange with ISIS to release civilian hostages from Sweida.

Drug trafficking in Sweida is a noteworthy contributor to rising resident opposition to Iran and regime-backed groups. Sweida has become a central region for Hezbollah and Iran to grow and trade drugs, with an intricate network internationally. According to in-depth reports completed by COAR Global(6) captagon(7) exports from reached a market value of 3.46 billion USD. Multiple local news  outlets(8) in Sweida have reported on the drug crisis in the province, highlighting the many drug workshops present to produce captagon. Civilians from Sweida are recruited to work in the drug workshops, and a portion of the profits go to the Iran and regime backed militias to fund arms and vehicles. The Government of Jordan recently released a statement declaring war on drugs, showcasing the growing problem in the region. 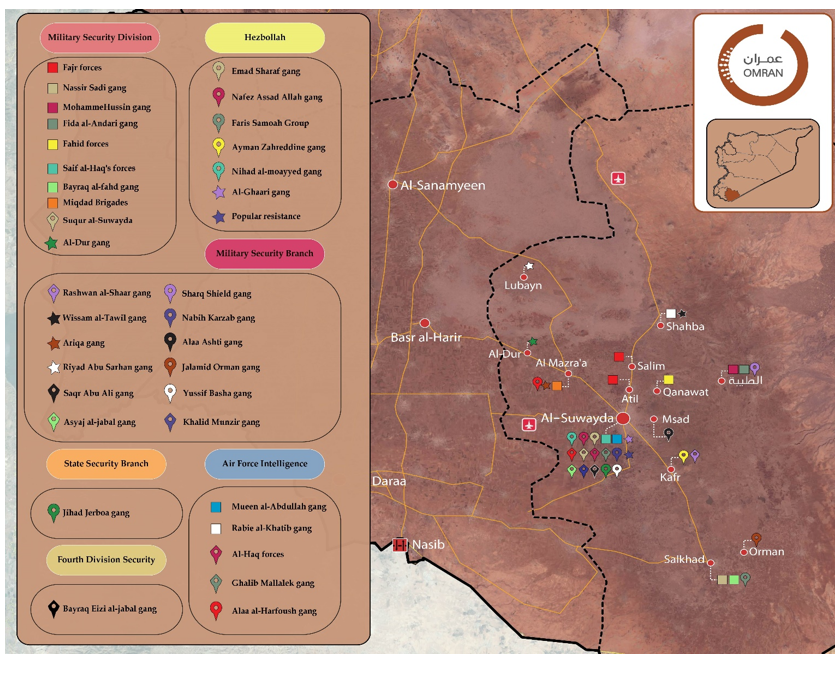 ([2])Issam Zaher Eddin, originally Druze from Sweida, was appointed as a major general in the Syria Republic Guard. He played a major role leading many regime offensives.

([3])A regime loyalist militia group that is backed by Iran and is accused of abducting and sparking clashes with local groups.

([4]) In the Dara’a scenario, after regime invaded and conquered the territory from the opposition in 2018, Russia proposed an alternative to the security structure. Instead of forcefully conscripting the young men in the region to join regime military and battle fronts, Dara’a created its own military group “5th Falaq group” to support regime security.

([5]) Appointed in March 2019, Kifah Millhem was appointed by the Bashar Al-Assad as the new chief of the Military Intelligence Directorate. He is suspected to be responsible for the deaths of thousands and a war criminal.