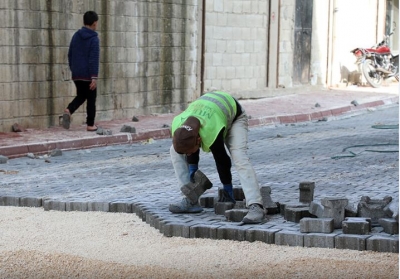 During the monitoring period, 812 projects and activities were implemented northern Syria’s opposition-held areas. Those areas include the northern and eastern countryside of Aleppo and Idlib. This marks a 77% increase or 355 additional projects. The economic development sector expanded the most, with 193 projects. This is followed by the WASH sector with 165 projects. 154 projects were also implemented by the transportation and communications sector, as well as 119 projects for the internally displaced.

Coordination between local councils and non-government organizations continued, with several announcements of MOUs. This included the building of a hospital in the city of Soran, and the support for grain farmers with compound fertilizers and wheat seed in Akhtarin. The report also highlights the increase in job opportunities, most of which were in the health, IDP support in camps, and infrastructure projects. About 947 job opportunities were registered, most holding temporary contracts between 6-12 months.

Projects monitored in the report were further analyzed for strengths and weakness. Among the most notable strengths was the local councils’ focus on securing electricity for hard-to reach areas, in addition to rehabilitating many city centers, main roads, and markets. The most prominent weakness identified was the over-reliance by local councils on economic recovery funding from local and international organizations and only playing an intermediary role due to its limited budgets.

Based on findings, the report outlined a set of recommendations. Prime among recommendations was to enhance a holistic development strategy to include sectors that lack support and have not received adequate attention in the last period. The recommendations also highlighted the need to expand programs such as “Cash for work” and “e-voucher” that support small businesses and handcraft projects.