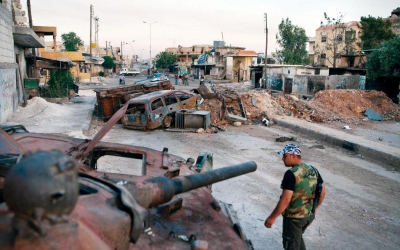 In recent weeks Daraa has witnessed the most intense clashes and aerial bombardments it has seen for years. Despite the plan for “de-escalation zones,” civilians in the city are likely to becaught in the newest battlefield for foreign power proxies and the warring Syrian sides.

ISTANBUL– When the Syrian government announced a 48-hour cessation of hostilities in Daraa on Saturday, some residents of the southern city were skeptical.

The brief pause in fighting, which ended on Tuesday as the Syrian army and its allied forces resumed their operation, came after two weeks of some of the most intense aerial bombardments and clashes the city has seen since 2015. Some saw the pause in fighting as a victory for the rebels who control the city and who have been resisting a government advance in the area since February. Others, however, were worried that the temporary halt was a cover for pro-government forces to bring in reinforcements.

The truce was announced just as the dates were set for the next round of United Nations-led peace talks in Geneva (July 10) and Russia-led negotiations in Astana (July 4–5). In theory, it sounded promising. Syrian state-run media said the purpose of the truce was “to back the national reconciliation efforts.” The area is part of Russia’s proposed “de-escalation zones,” where a ceasefire has, in theory, been in effect since last month, though it has not been enforced.

In fact, in recent months the area has become the newest battleground for fighting between rebel and pro-regime forces – and the various foreign powers with different strategic interests in the south. Aerial bombardment and ground clashes between opposition and pro-government forces are continuing in Daraa city. 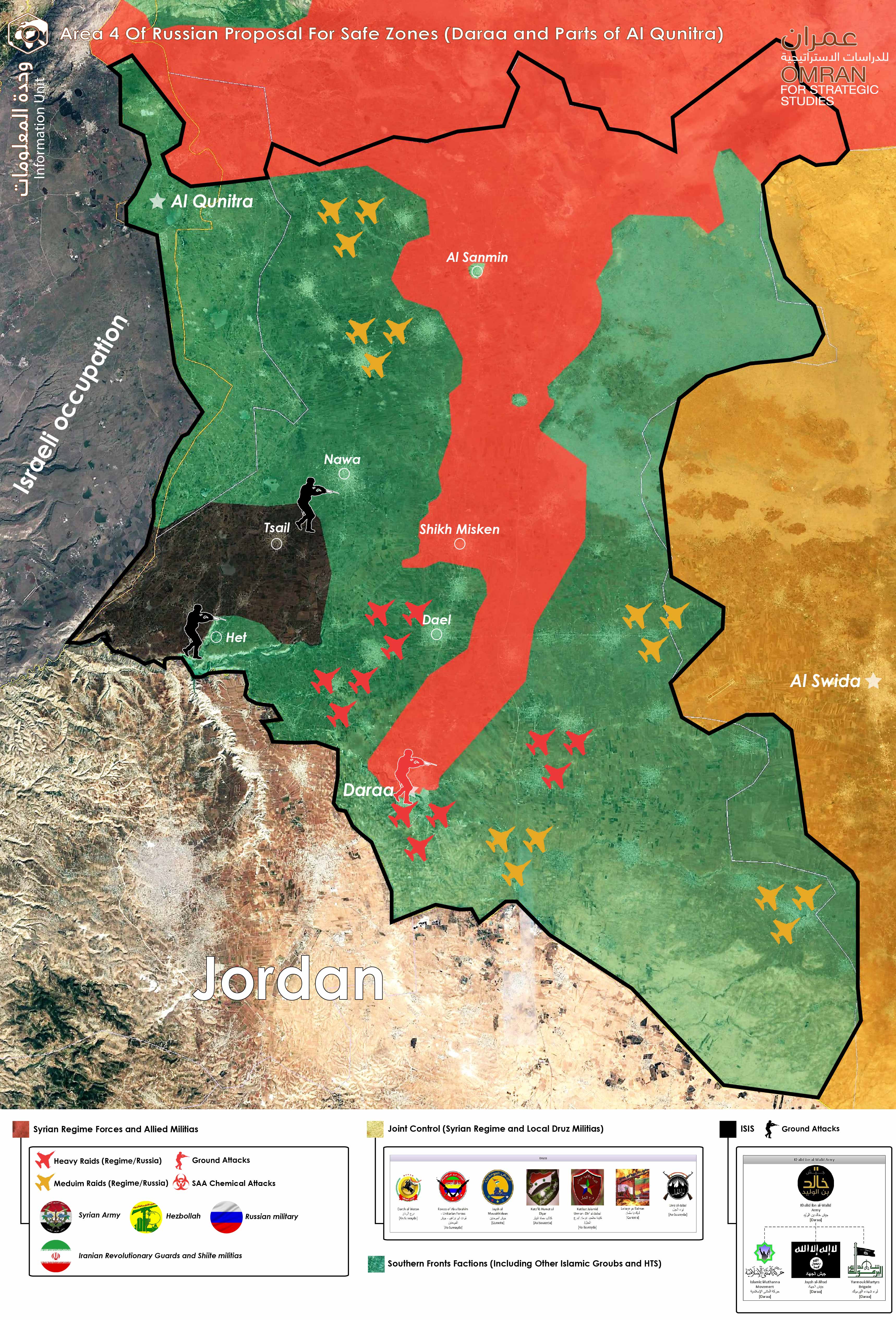 “Moving forward, the bombing is only going to increase, and there will be no reconciliation,” a Syrian military source told the nonprofit journalism organization Syria Direct. “Give it a month, and this will all be taken care of.”

With so many parties involved, a lasting ceasefire in the area is an unlikely option, and despite the international community gearing up for yet another round of discussions aimed at stemming the ongoing violence and destabilizing the actions of warring parties, civilians in Daraa continue to suffer.

Pro-government forces have carried out roughly 2,000 air raids, including the use of barrel bombs, missiles and artillery shells, on Daraa city in recent months, according to the Syrian Observatory for Human Rights, a United Kingdom-based monitoring group. In the two weeks before the temporary ceasefire, pro-regime forces allegedly carried out 645 barrel-bomb attacks, 199 airstrikes, 645 mortar attacks and 91 napalm rocket attacks, according to the volunteer group Syria Civil Defence.

During this time at least 88 civilians, including 18 children and seven women, were reportedly killed by pro-regime forces. Twelve people were killed in an airstrike that hit a school housing IDPs, Muhammad Asakra, a citizen journalist based in Daraa city, told Syria Deeply. A government missile also hit the civil defense center in Daraa last week, rendering the building and one ambulance inoperable, according to the Syrian Network for Human Rights.

The increase in attacks preceded a major ground offensive in the city by the Syrian army and Iran-backed Shia militias. On June 4, pro-government reinforcements, including Lebanese Hezbollah and Shiite Iraqi militias and the army’s elite 4th Armored Division, were deployed in what rebels said was a move to seize the city and control Syria’s border with Jordan.

Pro-government forces were attempting to advance on the Daraa camp neighborhood to outflank the opposition, which had recently seized roughly 90 percent of the strategic al-Manshia district, Abo Muhammad Daraa, the spokesperson for rebel league Ahrar Horan, told Syria Deeply.

Fighting broke out in February when some Southern Front rebel factions, with members of Ahrar al-Sham and the al-Qaida-linked Hayat Tahrir al-Sham, launched the “Death Over Humiliation,” offensive against government forces in Daraa city, aimed at preventing the regime from capturing the border crossing with Jordan. On February 17, opposition fighters captured most of al-Manshia district and part of the highway leading to a crossing, postponing any regime attempts to reopen it. 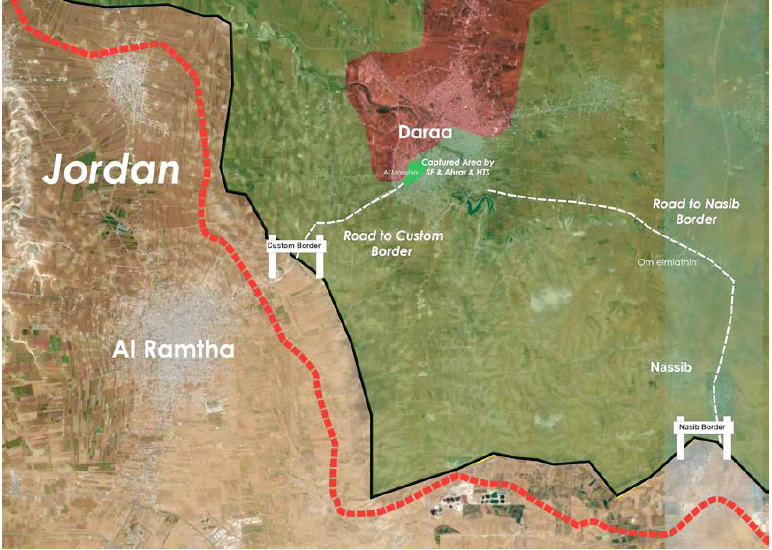 Map showing the location of the February battle between rebels and pro-government forces to capture the border crossing with Jordan. (Nawar Oliver)

The partial truce came only after “repeated” failed attempts to seize the city, Major Issam al Rayes, spokesman for the Southern Front coalition of the Free Syrian Army (FSA), told Reuters. “The regime’s forces have stopped their military operations after big losses in equipment and men since the start of their campaign over a month ago,” he added.

According to a statement from the rebel military operations room known as al-Bunyan al-Marsous, at least 40 members of pro-regime forces were killed in recent clashes in Daraa, including high-ranking officers, such as Ahmad Fayez Tajo, who directed fighting in Zabadani city and Darayya district. Senior Iranian military adviser Haydar Jalilond was also killed in fighting in Daraa, according to the Iranian Nasim news agency.

The Syrian government is not the only side fighting in Daraa with foreign allies. Jordan, which shares a 235-mile (375km) border with Syria, and its allies have maintained relations with rebels to deter fighting and keep the border region relatively free of hostilities. As a result, until February, Daraa had largely been considered a de facto safe zone – despite intermittent Syrian airstrikes.

The southern provinces are largely under the control of Syria’s armed opposition, comprising roughly 40 Free Syrian Army-linked factions operating under the Southern Front umbrella. The Southern Front has received varying degrees of training and funding from countries in the joint Military Operations Center (MOC) between Western and Gulf states based in Amman. This has enabled Jordan to exert control, with tacit consent from the U.S., Israel and Saudi Arabia, over rebel factions near the Israeli-controlled Golan Heights, southern Daraa province and the Yarmouk Valley.

Until February, the MOC had also been able to regulate the majority of activities between Southern Front factions and the Syrian regime. For example, in August 2016, the MOC reportedly offered Southern Front rebels monthly salaries if they refrained from an offensive against the government-controlled town of Sheikh Miskeen. This is just one instance of how Jordan had managed to keep a relative level of calm in the south before February.

Table showing the change in percentage of control of the different groups in southern Syria before and after the recent offensives. (Nawar Oliver)

When fighting broke out in February, the Jordanian government’s initial reaction was to close 55 miles (90km) of its border with Daraa and Quneitra, denying entry to everyone, including injured civilians. The MOC responded by attempting to persuade the Southern Front factions to stop the battle or halt their participation – signaling that Jordan did not consent to the fighting.

One source close to the situation, who requested anonymity for security reasons, suggested the battle was not a rogue move by the rebel groups, but rather an American plan to deter Syrian government- and Iran-backed pro-government forces from taking control of the border crossing with Jordan so close to its ally Israel. The U.S., Jordan, the Gulf States and Israel, on varying levels, oppose a strong Iranian presence on the southern borders – one of the main obstacles for foreign cooperation in a southern safe area.

Daraa was not always a hub for foreign interests. The city, the homeland’s shield, was considered the spark that ignited the uprising against President Bashar al-Assad’s government in 2011.

The relative calm in Syria’s south in recent years has largely kept Daraa out of international headlines, but six years on residents and activists in the city are once again mobilizing to try to put an end to violence against civilians.

They started the “Act for Daraa” social media campaign on June 12 to raise awareness of the situation in the southern city. Using the hashtag #ActForDaraa, activists share photos, videos and reports of attacks in Daraa on various social media platforms. Some have also organized various sit-ins and demonstrations, and social media users around the world have posted pictures of themselves holding signs in support of the campaign.

السابق Caesar Testimony: A Step Forward to counter With Assad Regime التالي Mapping the Battle Against ISIS in Deir Ezzor