Strait Talk: Panel discussion with Yaser Tabbara and Sinan Hatahet on the latest in Raqqa 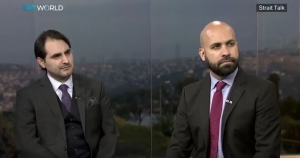 Mr. Yaser Tabbara board member of the Omran Center for Strategic Studies. And by Sinan Hatahet answered several important question in regard of Raqqah operation and what is the current condition after U.S. and their ground Allies "PYD" took control of the city from "ISIS". Mr. Yaser talked about the current relationship between the U.S. and "PYD" specially after raising "Ocalan" picture in the city by some "PYD" fighters. Mr. Yaser also talked about the Syrian Regime reaction on "PYD" taking control of the City, and what are the possible scenarios for the Regime in regard of Raqqah