Iranian influence within the Regime Army.. 2017/18 strikes that targeted Iran in Syria 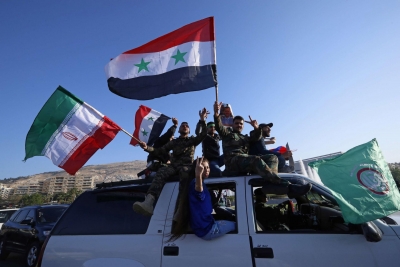 Iran was present in Syria from the very beginning of the revolution and was a strong supporter of the Syrian regime, In addition to providing the regime with weapons, soldiers, advisors, money, and political support, Iran also brought in sectarian fighters from countries including Afghanistan, Iraq, and Lebanese to form militias and fight alongside the regime.

Today in 2019, Iran's role in Syria appears to be expanding even further. Iran’s strategy has entered a new phase in which it recruits Syrians loyal to the regime to fight under direct administration and command of the Iranian Revolutionary Guard Corps (IRGC), relying on local defense forces and newly formed military brigades.

Iran’s Most Significant Influences in the Syrian Army

The National Defense Forces (NDF) was established in 2012 under the direct supervision of Iran to serve as an auxiliary militia force for the Syrian army. By the end of 2017, a similar group known as the Local Defense Forces (LDF) was established in Aleppo governorate, specifically in its eastern countryside. The LDF consisted of several small local militias operated directly under the supervision of Iran, but without any legal status in Syria. Iran established and supported the LDF and linked its structure to the structure of the Syrian army, avoiding the error that occurred when the NDF were established. Recently, LDF members have been able to resolve their legal status and join the Syrian army, but their time in the LDF is not counted as time in the army's service.

On 6 April 2017, a memorandum from the "Organization and Administration Division / Branch of Organization and Armament" was issued to the General Commander of the Army and the Armed Forces, Bashar al-Assad, in order to suggest ways to formalize the status of Syrians, both civilians and military, who have worked with the Iranian side throughout the crisis. President Bashar al-Assad signed that document, in agreement, in April 2017.([1])

The document was signed by the head of the "Organization Division" Maj. Gen. Adnan Mehrez Abdo, the Chairman of the General Staff of the Army and the Armed Forces, General Ali

Ayoub, the Deputy Commander-in-Chief of the Armed Forces and the Minister of Defense, General Fahd Jassim al-Fereij.

According to the document, the committee examined the organization of these forces from the aspects of "organization, leadership, combat, and material guarantee, rights of the martyrs, wounded and disappeared, sorting out the affairs of those commissioned who have avoided obligatory and reserve service and deserters, and the civilians working with the Iranian side." It recommended the following proposals:

The following tables lay out the most prominent combat groups that were part of the LDF at the time of its establishment. The groups named below, in addition to several additional formations that participated in the battle of the southern Aleppo countryside in early 2018, include an estimated 45,000 fighters in total: 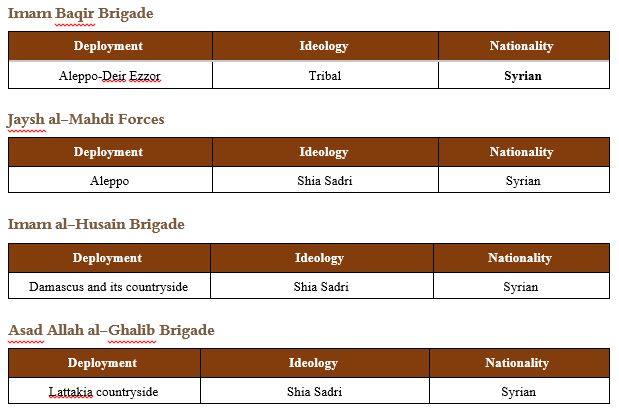 Iran has continued its efforts to expand into southern Syria despite international agreements aimed at limiting its role in the region. In doing so, Iran is violating the Hamburg agreement between Russia and the United States, which required Iranian troops and affiliated militias to stay at least 35 kilometers away from the Syrian-Jordanian border. ([2]) 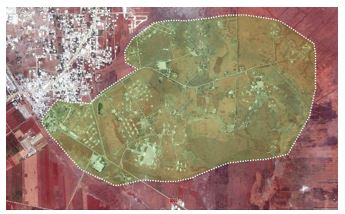 In November 2017, the IRGC established a special military body on the southern fronts of the Syrian army, called "Brigade 313." That same year, the brigade opened a recruitment center in the city of Izra'a in Daraa governorate. Through this center, Brigade 313 attracted more than 200 young Syrians from Daraa, most of whom were young people who reconciled their status with the regime in 2017. New members of Brigade 313 receive an identity card bearing the emblem of the IRGC, which ensures their ability to pass through the regime force checkpoints. Within two weeks of joining Brigade 313, recruits are enrolled in training camps in Izra'a and Sheikh Meskin.

Brigade 313’s headquarters is located about 30 kilometers from the border with Jordan and about 45 kilometers from Israel. For this reason, the brigade's location poses a direct threat to the agreement between Washington and Moscow.

Iran's efforts to recruit local elements and integrate other militias with these bodies ramped up in anticipation of international efforts to deport Iranian-backed militias containing foreign elements, mostly from Afghanistan, Lebanon, and Iraq. 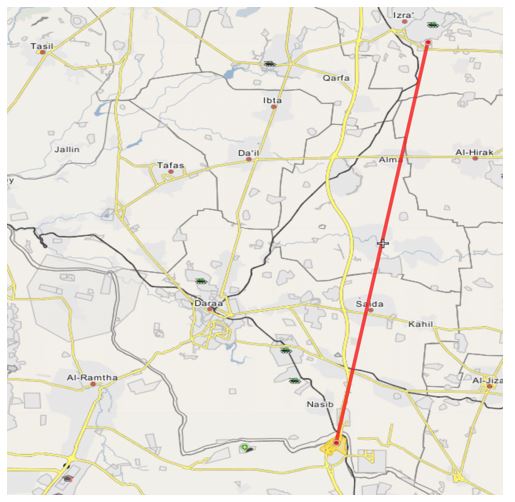 Major Israel and U.S. attacks on Iranian forces and affiliated militias in Syria

Following the crash of the Israeli warplane, the Israeli Air Force responded by targeting several, locations near the administrative border between Damascus governorate and the southern governorates of Daraa and Quneitra. Specifically, Israel targeted areas where the Iranian-backed Brigade 313 forces andLebanese Hezbollah forces are stationed in the town of Al-Dimas on the Damascus-Beirut road near the Syrian-Lebanese border.

The Israeli Defense Force (IDF) media announced that seven locations were successfully destroyed (three Syrian air defense batteries and four targets belonging to Iran), and confirmed that Syrian regime anti-aircraft missiles capacity dropped to 50% after most of its locations were destroyed. 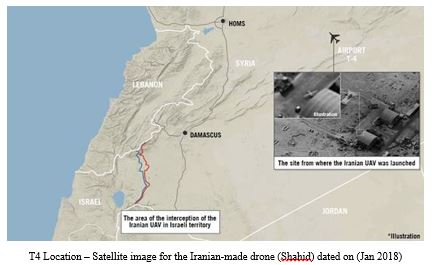 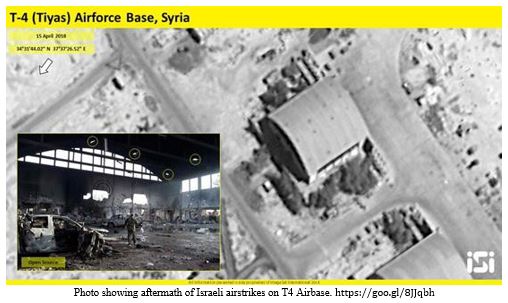 Iranian locations that were targeted before, after, and during the April 2018 strikes by the U.S. and its allies

Between 15 and 18 April 2018, after the U.S.-led attacks on Syria, two Iranian locations in Syria were reportedly targeted by unknown attacker: one in the Azzan Mountains in southern Aleppo and the other near al-Shiraat Airbase. There was no confirmation from the regime’s media regarding these attacks, only local sources confirmed seeing or hearing the explosions.

Israeli missiles struck the first Armored Division (Jabal Al-Mani) in al-Kiswa near the Syrian capital Damascus. The attack took place after an hour after U.S. President Donald Trump announced he was withdrawing from the Iran nuclear deal. At least 13 fighters were killed in the attack; seven of them were members of the IRGC and other Iran-backed militias.

Hitham Abdul Rasol, IRGC commander and developer of "Fajr-3" Iranian missile defense system, visited two Iranian locations on the same day of the attack: one in al-Zabadani and the other at the Damascus International Airport. Both of these locations are likely to host "Fajr-3" systems.

After Iranian forces fired 20 rockets at Israeli military positions in the Golan Heights at night on 9 May 2018, Israeli Air Force planes entered Syrian airspace to attack dozens of Iranian targets inside of Syria. The following table lists the major locations that were targeted:

On 25 December 2018, Israel launched a series of airstrikes against military targets in Damascus and its countryside, targeting military sites and weapons stores where pro-Iranian forces were deployed. These strikes were launched in two stages and are unique in terms of timing, targets, intensity, and messaging.

These Israeli attacks were the ninth of their kind in 2018. They were the second such strikes to take place after Russia's deployment of the S-300 air defense missile system and the first since Donald Trump announced the withdrawal of U.S. forces from eastern Syria. Israel’s 25 December strikes were notable because they indicated the return of coordination between Moscow and Tel Aviv in Syrian airspace in support of their common interests in the reduction of Iranian influence and potential expansion in Syria. They were also notable because they conveyed the clear message that Israel would continue its policy of striking Iranian forces and infrastructure in Syria despite the U.S. withdrawal. The intensity and length of the attacks may also indicate Israel's readiness for a future escalation against Iran in Syria and serve to push Russia and the U.S. to deal more seriously with the dilemma of expanding Iranian influence.

Israel sees the American withdrawal from Syria as an opportunity to intensify its pressure on Iran and test Iran’s reaction. If Iran responds aggressively to Israel’s intensification, it will lead to regional escalation and pressure the U.S. to adopt more punitive policies and measures against Iran, possibly delaying the U.S. withdrawal from Syria. It may also delay Iran's plans to expand in the eastern region of Syria to counter the growing Russian presence there. However, Iran may also choose to absorb these Israeli strikes and respond either on a small scale or not at all, in order to focus on filling the vacuum in the eastern region following the U.S. withdrawal. It will encourage Israel to launch more attacks against inside Syria during the transitional U.S. withdrawal period if it is actually completed, which is a likely scenario.

The Israeli Air Force struck some ten targets in Syria overnight from Sunday 20 January – Monday 21 January. The attack targets included arms warehouses at Damascus International Airport and other locations, and sites belonging to IRGC including an Iranian intelligence site and an Iranian training camp. The attacks were in response to a ground-to-ground missile that was fired at Israel from Syria a day earlier and intercepted. 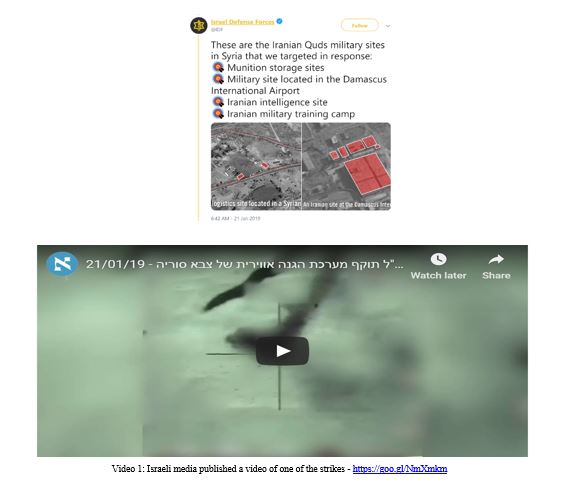 The Israeli air force launched airstrikes on the industrial zone in the northern city of Aleppo, causing damage only to materials as per the official pro-Regime news agency "SANA," while opposition sources said the strikes hit Iranian ammunitions stores and a military airport used by Iranian-backed militia's forces. ([3])

Inside sources confirmed that the Israeli airstrikes targeted two warehouses in the industrial area of Sheikh Najar. The warehouses contained light and medium ammunition, based on the type of ammunition that was heard in the blast after the airstrikes.

These warehouses are under the control of Iranian-backed militias, until now the identity of the militia, which was hit, is under investigation. However, according to previous information Badr Organization, Fatemiyoun, Hezbollah, and al-Nujbaa are based in this area.

The site of the airstrikes was locked down for seven hours then it was opened only for LDF forces and SANA, which published pictures of the site showing that the raid targeted an empty warehouse and only caused martial damage.

ISI published recent pictures of the location that was targeted, the pictures showed several damaged warehouse in the area of the airstrikes, and it's also visible that these airstrikes targeted specific locations and not a random hit in order to destroy empty buildings as per the official regime news agency statement. 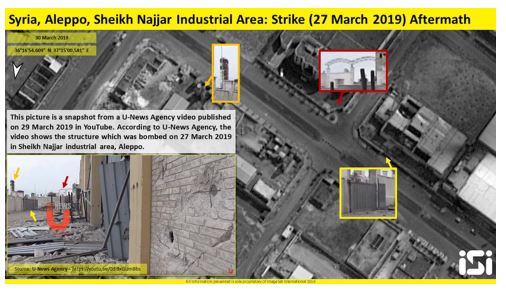 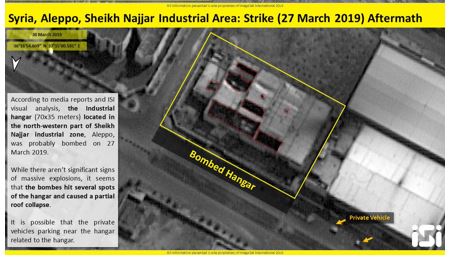 Pro-Iranian accounts promote that the strike was in line with Turkey's desire to empty the towns of Nubl and Zahraa to form a Sunni belt, that's why the regime with the support of the Iranian took the decision to intensify the military presence to prevent any future Turkish military plan.

The Israeli Air Force launched airstrikes from Lebanese airspace on targets in the Syrian province of Hama. According to inside sources and Pro-Regime media, the target was a military location of IRGC and other Iranian-backed militias and the area is located between the research center and al-Talaa Camp. 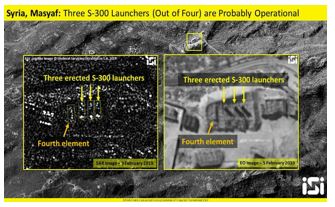 In February 2019, ISI center published pictures showing the Russian S-300 surface-to-surface missile system based in Syria near the targeted area. This was the third strike in 2019 that explicitly targeted Iranian-backed militias.

The first one targeted Damascus International Airport, the second was on Aleppo airport and the industrial zone, while the latest, as we mentioned, it targeted Iranian-backed militias’ bases near the city of Masyaf in Hama province.

Since 2017, Iranian military sites in Syria have been continuously targeted by Israel, the U.S. and their allies. These attacks pushed Iran to find a way to protect its presence. Since 2018 Iran has been reintegrating its militias into military formations affiliated with the Syrian regime, which has led to reducing the intensity of the raids against them but did not prevent them.

In general, the raids on Iranian sites did not have a long-term impact on Iran's strategy and goals in the region. The areas under Iranian influence in Syria remain large with various levels of infiltration (military, security, social and economic). This Iranian infiltration and expansion strategy came as a precautionary measure if air strikes were to continue. 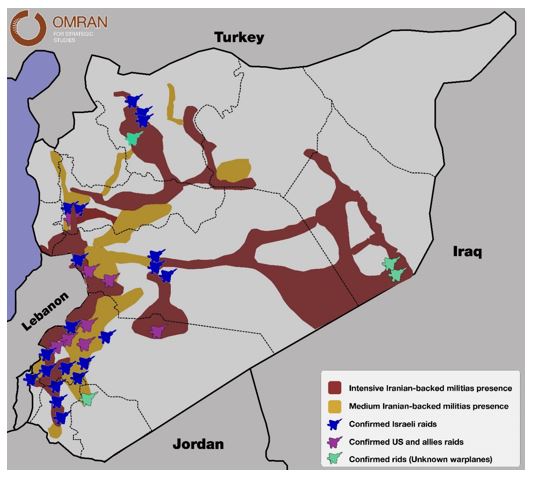