Indicators of Security Stability in Syria and Refugee Return: An Evaluation of Select Cases 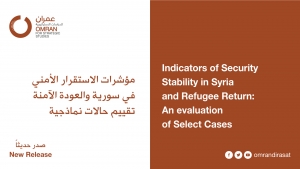 •    Utilizing a qualitative approach, this report covers four security related indicators that significantly influence refugee and internally displaced persons (IDP) decision to return to their original homes. Presenting a wide range of figures and trends, the four indicators that are covered within this report are: assassinations, explosions, extrajudicial detentions, and abductions. As the Syrian crisis grows more complex, security and stability are the main pillars that lead to recovery and safe return of those displaced. By covering the four security indicators, this report attempts to present both the individual and societal perspective that may feed into policy aiming for recovery and progress.

•    The report examined occurances of assassinations and explosions in the governorates of al-Hasaka, Deir Ez-Zour and Daraa during two time periods: last 6 months of 2019 and first 6 months of 2020. During this period, 308 explosions and 72 assassinations were logged. Methods used varied from gunfire in 213 incidents, IEDs in 94, car bomb in 39, mines in 25, grenades in 9 cases, as well as other methods. The total number of casualties reached 1,008 including 490 military personnel and 518 civilians. Daraa, Deir Ezzor, and Al-Hasaka, the selected case studies in the report, expose the failure and weakness of the regime, and to a lesser extent the Autonomous Administration (AA). The number of explosions and assassinations were high within these governorates, due to the unsecure environment and the various actors that included local, foreign and militia actors, each with a separate agenda. The instability and dangerous situation have had an adverse effect on the safe return of refugees and internally displaced individuals.

•    In opposition-controlled territories, incidents of assassinations and explosions within the studied timeframe amounted to: 1,209 casualties, the included 890 civilians and 319 military personnel. IEDs were used in 93 cases, while car bombs were used in 69. As revealed through the analysis from the Euphrates Shield and Afrin territory, the “Wrath of Olives-Ghadab al-Zaytun” operation room held a leading role in the adoption of assassinations within the two areas. There was also a substantial rate of extrajudicial detention and abduction incidents within the monitored areas. The figures highlight the failure of security agencies in protecting their local environments from breaches and their inability to identify methods used by perpetrators. The fragile security environment has raised skepticism on whether there could be a safe return of refugees.

•    In the cities of Jasim, Douma, al-Bukamal, and Raqqa, 73 abductions and extrajudicial detentions occurred, including 15 in Jasim, 20 in Douma, 20 in al-Bukamal, 18 in Raqqa. 23 of the operations were committed by foreign actors, resulting in 182 casualties, 19 incidents committed by local actors, which resulted in 117 casualties, and the perpetrators of an additional 31 incidents are unknown, but resulted in 89 casualties. The total number of casualties is 388, including 188 civilians (109 which are from reconciled areas) and 56 military personnel, including 12 from the ranks of the AA’s People Protection Units (YPG), 20 from civil defense, 2 from the AA, and one person from the Military Security branch. These figures illustrate the decline in security and stability. Perpetrators vary between local and international actors. This further highlights the deterioration and inefficiency of security actors.

•    In the cities of Afrin and Jarablus, there were 169 extrajudicial detentions and abductions; 37 in Jarablus and 132 in Afrin with 355 casualties. The “Wrath of Olives” operations room expanded to 17 operation rooms. The incidents focused primarily on targeting and killing members of the Syrian National Army. According to reported data, the highest number of incidents took place in January 2020. Known actors were responsible for 141 extrajudicial detentions, while 28 remain unknown. The majority were identified in Afrin, which highlights the failure of security actors to maintain a secure environment.

•    The data and analysis resulted in a number of recommendations concerning efforts to aid in Syrian refugee and IDP return. The main recommendation is for decision-makers to avoid general policies that do not explicitly define the necessary terms of security and stability. In order to achieve the level of detail necessary, key stakeholders must agree on legal, administrative, and political conditions that will insure a the safe, dignified, and voluntary return of Syrians.

II.    Introduction
Security, stability, and early recovery are dependent upon one another in a political transition and reformation. As highlighted throughout history, security and stability are essential and were predominately achieved by instilling a new political order that removes the main sources of conflict. Syria is no exception, as the need for a political transition grows more urgent. Although security and stability are a focus point for key stakeholders, the growing fragmentation and chaos has only expanded the various layers to attaining security. Also contributing, the prolonged political process, including the constitutional committee, have laid a confusing path with unclear outcomes that would lead to a stable political climate in the near future. The current outlook does not clearly outline when a secure and stable environment will be set for Syrian to return.

As the Syrian conflict reaches a “precarious freeze,” it has become increasingly apparent that the security borders separating the three zones will be consolidated, which are the zone influenced by Turkey northwest of the Euphrates, the zone controlled by the Autonomous Administration (AA) in cooperation with the United States, and Assad regime-held areas, secured with Iranian and Russian influence. Despite the divisions, security and stability are critical in moving forward with early recovering and attaining social stability, whether inside Syria or in neighboring regions. This report will focus on four particular indicators of security; assassinations, explosions, extrajudicial detentions, and abductions. A variety of cities from a wide range of backgrounds were selected as case-studies to cover the different areas of control in Syria.

Strategically selected, the case studies attempt to present a general picture of Syria’s current security condition. The first and second section of the report, presents an overview of data collected concerning explosions and assassinations over the course of a year, starting from the beginning of July 2019 until June 2020. explosion The sections cover the three areas of control through case studies from the following areas; in the Deir Ezzor and Daraa governorate are covered for Assad regime-held territory, areas in Deir Ezzor and Al-Hasaka governorate are covered for the AA region, and cities in Idlib, Aleppo, Raqqa, and Al-Hasaka are covered to represent the situation in opposition-controlled areas.

To measure indicators for assassinations and explosions, a tailored-approach was to collect and analyze data. Forms were utilized to record information on explosions and assassinations, including date, location, type of incident, target, targeting method, status of the target, and the actor. The results and consequences of each event were also recorded. After collection, data was cleaned and cross-checked, after which a cross-regional analysis was formed on the security conditions, stability, and how it relates to the topic of safe and neutral return.
The report relied on the following sources:

1) Accounts of activists in areas under observation or those following security operations on social media platforms.
2) Accounts and official websites of agencies and local media that cover events in those governorates.

The other two critical indicators of safe return, detention and abduction, were analyzed through case studies from the three particular zones of control. In regime-held areas, the city of Jasim in Daraa, Douma in Damascus, and Al-Bukamal in Deir Ezzor were selected. All three have been under the control of the regime since 2018. For opposition-controlled areas, the city of Jarablus and Afrin in Aleppo were selected. Both fell under opposition control in 2018, after Operations Euphrates Shield, therefore fitting into the same framework. The timing of control and the sensitivity of the situation in Afrin allows for the security situation to be compared with regime-held case studies.

For this purpose, a tailored form was designed to monitor these incidents and analyze their data as indicators of stability and safe return over half a year starting from October 2019 until the end of March 2020. The form of detention and abduction was designed as follows: (Date – location – type of operation – status of the target – number of those targeted – parties in control – places of observation – targeting party – gender of the target). In terms of sources, the report relied on private interviews with well-informed individuals whom are familiar with the details of the events in the monitored areas. In addition to relying on:

1.    The observation points affiliated with the Information Unit at Omran Center in northern Syria.
2.    The special security report issued by Ihsan Relief and Development offices inside Syria.
3.    The official social media sources of the targeted parties.