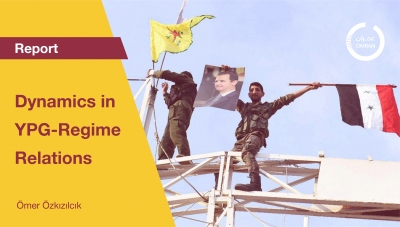 While facing a potential new military operation by the Turkish Armed Forces and the Syrian National Army (SNA) in northern Syria, the general commander of the YPG-dominated Syrian Democratic Forces (SDF) stated in his interview with Asharq al-Awsat:

“We are not opposed to the SDF becoming part of the defense organization of the Syrian army. We have conditions, however. We boast over 100,000 fighters, who have spent the past ten years in combat. They need a constitutional and legal resolution. The SDF must have a role and specific distinction in the military. We are in agreement over general issues, but the problems lie in the details.”

He also stated; “I want dispatch a delegation and go to Damscus when the conditions fora solution are available. I want my trip to Damascus to help in reaching a peaceful solution to the current crisis. ”This statement outlines the current relationship between the Assad regime and the YPG. To understand this relationship and how a potentially new military operation may impact it, this report explores the dynamics of the relationship with focusing on the main dynamics that are related to a Turkish-Syrian military operation.

The first dynamic in the YPG-regime relationship is the concept of a common enemy. For both actors, Turkey and the Syrian opposition are perceived as enemies. However, the YPG’s and the regime’s perspectives oppose one another. The YPG perceives Turkey as an existential threat and sees the Syrian opposition as an actor that enables and facilitates Turkish military operations against the YPG. The Assad regime perceives the Syrian opposition as an existential threat and Turkey as an actor that enables the continuing presence and territorial control of the Syrian opposition. But, since 2016 during Operation Euphrates Shield, there was growing cooperation between the YPG and the Assad regime. Both YPG and the regime forces worked together against Turkey and the current situation resulting in YPG-regime signing an agreement in 2019. During this time, the Assad regime protected the YPG along the frontlines with the Turkish Armed Forces and SNA. Furthermore, in the past, the Assad regime handed over predominantly Kurdish territories to YPG as part of their cooperation in capturing Tal Rifaat and their joint fighting to besiege Aleppo city.

In looking at the second dynamic, the American military presence in Syria negatively influenced the YPG-regime relationship due to their support for the YPG. The US enabled the YPG to control vast territories and altered the balance of power between these two actors. The Assad regime and its supporters, including Iran and Russia did not want the US to remain in Syria. Moreover, there is a difference in ideology between the old and new generations within the PKK – the YPG’s main branch – as it relates to its international relationships. While the old generation values historic partners like the Assad regime, the new generation places its trust in its partnership with the US.

Interdependency is the last main dynamic in the YPG-regime relationship. The YPG and the Assad regime both have territorial control that relies on one another to cooperate. For example, the regime's territorial control in Qamishli and Hasakah is surrounded by the YPG and requires YPG cooperation. Similarly, YPG’s presence in Tal Rifaat and the Shaikh Maqsoud neighborhood in Aleppo city is dependent on the cooperation and protection of the regime that surrounds those areas. Since 2019, the Assad regime deployed army soldiers to the frontlines alongside the Turkish Armed Forces and SNA to function as protection to and from the YPG. This is due to the regime units being located in areas that are far away from regime-held territories where if a war broke out or the regime decided to withdraw their forces, then the YPG could have the ability to target and eliminate these units before the possibility of support arrives. Thus, this delineates the interdependency these two parties have with each other with the regime’s ability to provide YPG with the protection requested while also ensuring their weak points are exposed to minimal dangers.

In looking at the prospects of the YPG-regime relationship, the Assad regime has stated that it wants to go back to how things were in 2010, but with a ‘controllable population.’ It would require the regime to either assert full authority or accept some level of autonomy under the Russian reconciliation agreement model. On the other hand, the PKK’s new generation wants to establish an autonomous region in Syria and achieve international legitimacy via the US with the possibility of engaging in deals on the behalf of Syrian between the US and Russia. With that, the old generation believes that going through Damascus could result in international legitimacy, and would be more realistic as they would gain more legal standing and recognition on a local/national level.

Based on this examination, the report provides four different options for a Turkish-Syrian military operation against the YPG that may alter the YPG-regime relationship: 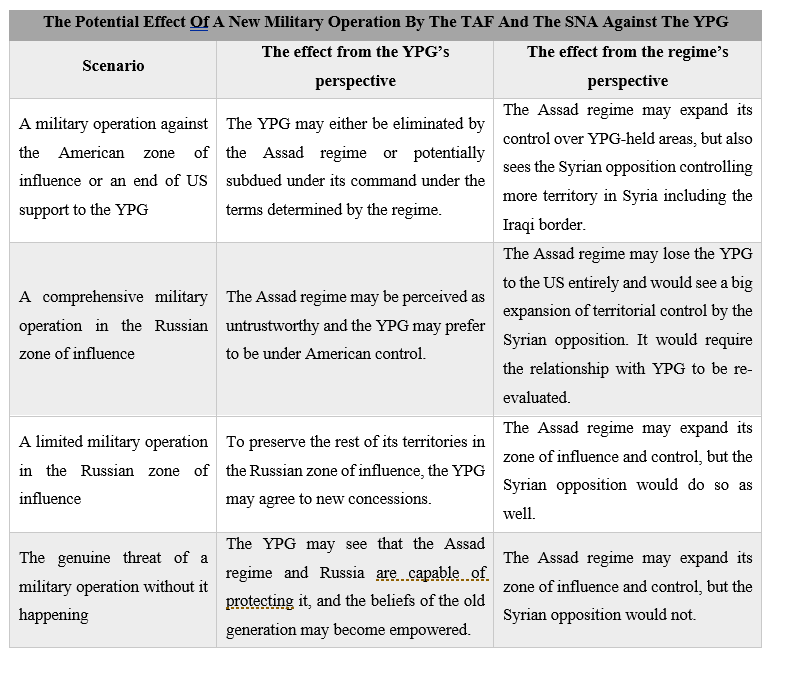