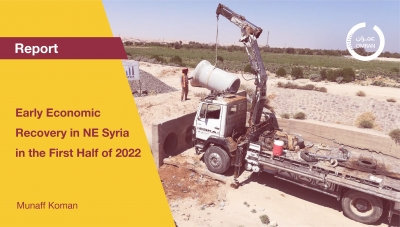 The Autonomous Administration region of North and East Syria (AANES) encompasses parts of the governorates of Hasaka, Raqqa, and Deir ez-Zor. It extends over 50.000 square kilometers and hosts approximately 3.2 million inhabitants.

Under the Charter of Social Contract adopted by the AANES, the region consists of seven self-governing sub-regions: al-Jazeera, Deir ez-Zor, Raqqa, Tabqa, the Euphrates (al-Furat), Manbij, and Afrin.

The objective of the early economic recovery report is to provide a comprehensive analysis of the activities of municipalities as well as foreign and local organizations in the region during the first half of 2022. By compiling other recovery reports from the opposition and regime areas, the combined reports seek to assess and investigate the following:

This report attempts to monitor and analyze the implementation of economic and development projects in various sectors. Accordingly, it induces decision-makers to direct the support and fill gaps wisely. Based on the updated administrative division of the region and according to the International Standard Industrial Classification, the report focused on main cities and towns with notable economic activity.

The report represents actual activities that took place based on public source information available as well as individual interviews conducted by field staff. It does not claim to reflect all activities that took place but those that were announced publicly. It monitored and assessed data from official social media accounts of municipalities and organizations that operate in the area by documenting their activities and public periodic reports, and utilizing specified monitoring criteria that enabled data analysis based on sectoral and geographical classifications. 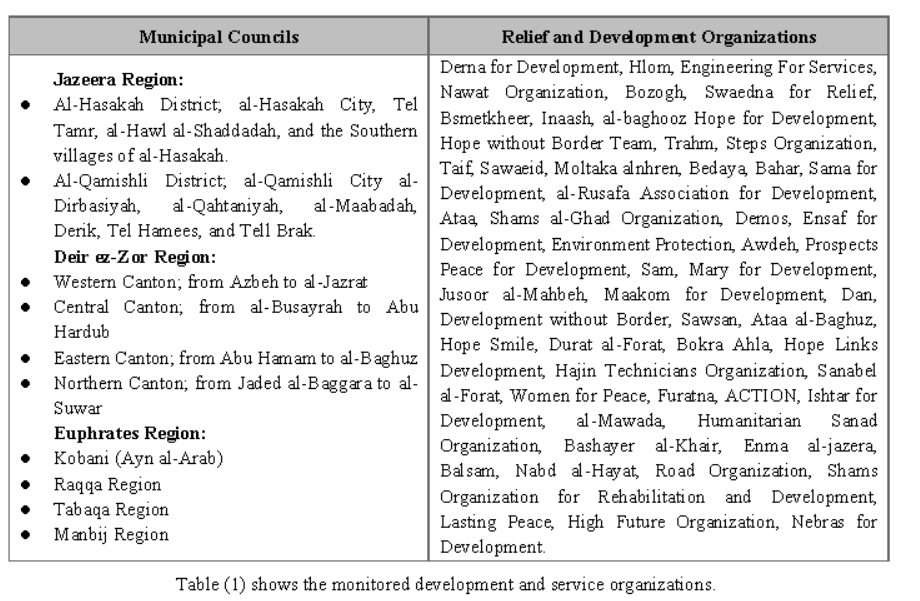 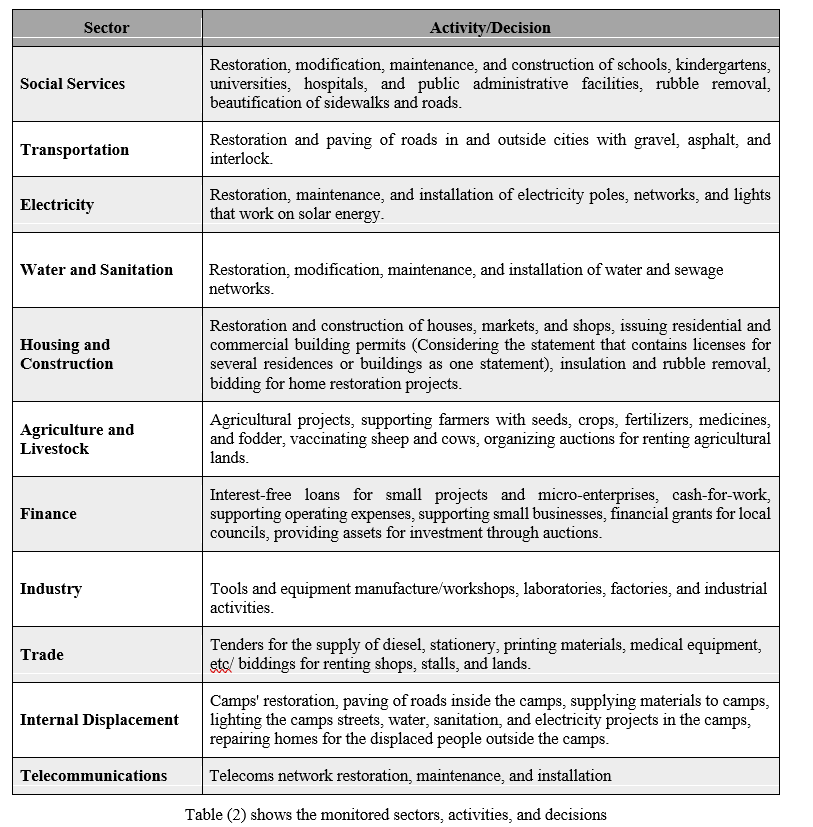 As indicated in Figure (1), the number of projects implemented in the various districts of the AANES was 358. As for the distribution of projects’ percentages, the water and sanitation sector topped the list with 148 projects (40%), followed by the transportation sector with 77 projects (21%). The electricity sector was ranked three with 51 projects (14%), and the social services sector came in fourth place with 34 projects (9%), as shown in Figure (2). 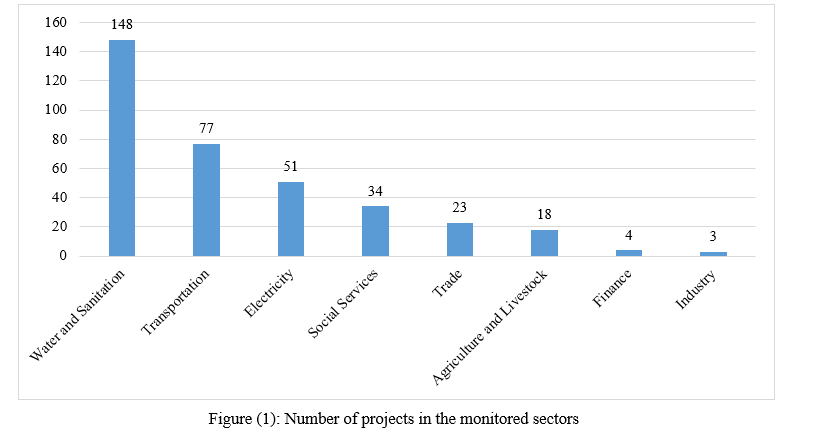 According to the geographical distribution of the monitored area, the largest percentage of projects was implemented in the al-Jazeera region 118 projects, followed by the Deir ez-Zor region 96 projects, Raqqa region 58 projects, Tabqa region 41 projects, Euphrates region 29 projects, and Manbij region 19 projects. 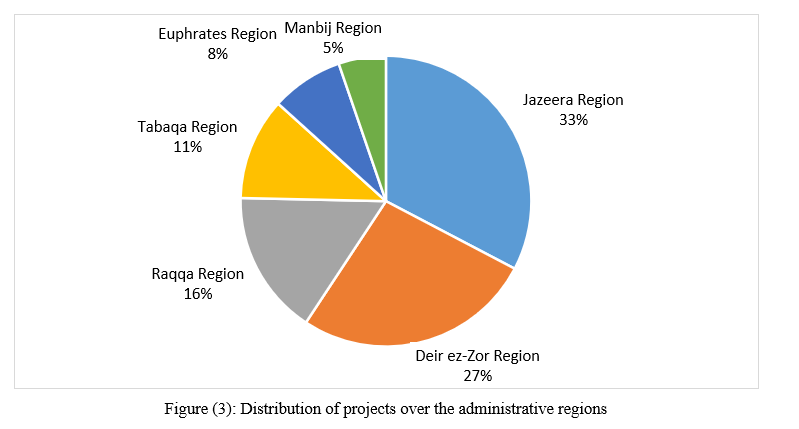 More specifically, Figure (4) displays the distribution of projects in the cities and towns monitored in all sectors. Markedly, Raqqa city ranked first with 58 projects, followed by the cities of al-Tabqa with 41 projects, Hajin with 34 projects, al-Qamishli with 26 projects, al-Busayrah with 23 projects, and Manbij with 19 projects. 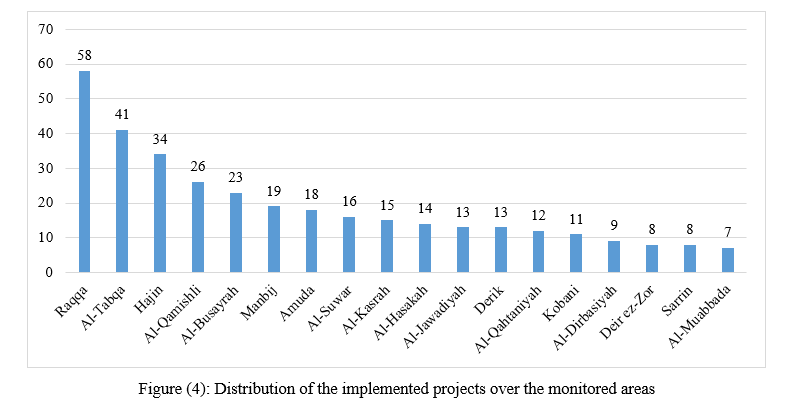 Out of 148 projects carried out, al-Tabqa city took the lead with 21 projects, followed by the cities of Hajin 18 projects and al-Busayrah14 projects, as shown in Figure (5). The projects included the installation of drinking water pipelines, with a length of 4000 meters, in the villages of Sarrin, Quroshan, and al-Murabba. There were also two other pipelines constructed: the first from the city of al-Busayrah to the reservoir of the village of al-Tukaihi (5,500 meters) and the second in the village of Abu al-Hassan (850 meters).

Other projects included expanding the water pipelines by 1150 meters in Hoti village, restoration of the water networks in the Kasra sub-district and al-Muhamida water station and establishing a new water station in al-Baghuz. However, the region suffers from several problems, the most significant of which is the lack of drinking water in the governorates of al-Hasakah, Deir ez-Zor, and Raqqa. For example, al-Hasakah city, which is inhabited by about a million people, suffers from constant water cuts caused by field disputes with the opposition factions in Ras al-Ayn, where Alouk water station operates.

The Alouk station delivers water to al-Hasakah at the rate of 60,000 m3/day, but the administration’s deliberate power cut disturbs its running. Russia has mediated between the two parties several times but all in vain. To compensate, the “administration” ran 16 desalination plants and transported water to homes through road tankers. 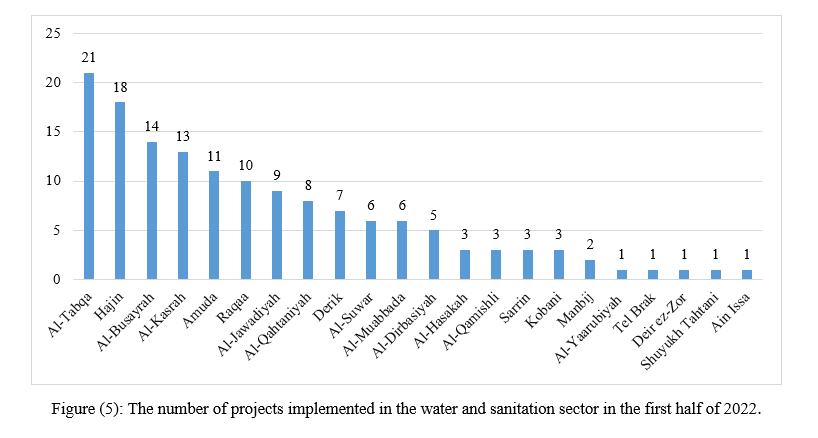 Seventy-seven projects were carried out in the transportation sector by municipalities and different organizations, with the cities of Manbij, al-Tabqa, Raqqa, and al-Qamishli taking the top four ranks, respectively. There were many projects of paving roads and restoration that took place in different locations of the monitored region, and here are some examples:

Fifty-one projects were implemented in the electricity sector, with al-Qamishli, Raqqa, and Hajin in the top three positions.

The works carried out varied to include the following:

Nevertheless, people suffer from a chronic electricity shortage. In fact, they depend on the amperes, as the AANES provides diesel at a reduced price for neighborhood generators at 85 SYP per liter instead of 410 SYP.

The situation was exacerbated in al-Qamishli, with the “Administration” cutting off diesel from the generators that provide homes with electricity. In addition, many factories, industrial and commercial projects, and bakeries became out of work because the “Administration” blocked the diesel allocations assigned to the industrial and commercial sectors. 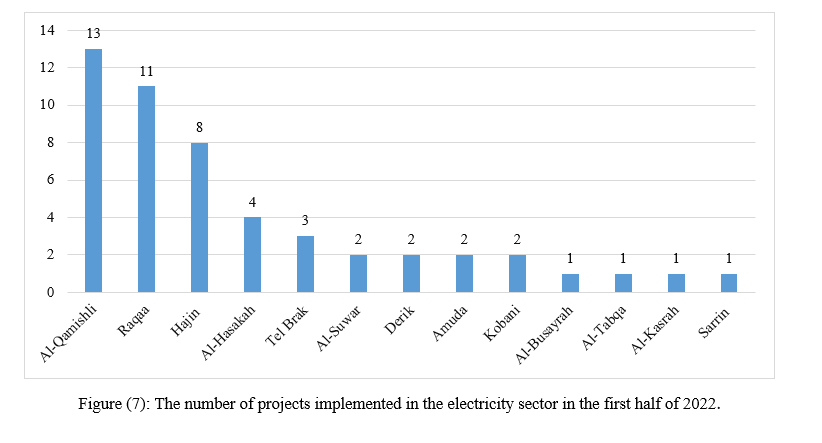 34 projects were implemented in al-Tabqa, Deir ez-Zor, and al-Busayrah, including rubble removal for the cities' streets. Other projects were also completed in the monitored towns and villages and included the following:

Although the AANES’s vision is to serve the interests of society by establishing economic institutions that are social in nature, the number of projects in this sector does not correspond to its stated goal.

In the trade sector, 23 projects were implemented, with Raqqa coming in first with 15 projects. Other cities such as Hajin, al-Tabqa, Deir ez-Zor, and Manbij were also included in the list.

The projects included several commercial and economic activities and were as follows:

The difficulties in the trade sector are evident in the “AANES” areas with the closure of the border crossings with Turkey and the problems of securing locally made products that meet people's needs. Still, Turkish and Iranian goods are spread in the region through the Semalka crossing. The economic ramifications are enormous, especially with the increased monopoly of goods by the war's new elites and smugglers affiliated with the Kurdistan Regional Government of Iraq.

The agriculture and livestock sector had its share of the development plan, with a total of 18 projects completed. Deir ez-Zor came first with four, followed by al-Busayrah, al-Suwar, and al-Qamishli, with two projects each. The most important projects were establishing two farms of cypress and pine trees in the Mazkaft Dam Reserve, planting 3000 trees in each one, and supporting the camel, poultry, and livestock ranchers.

Until July, the Economics and Agriculture Board reported receiving about 360 thousand tons of wheat in Northeastern Syria and distributed 647,000 tons of fertilizer to farmers in Amuda.

During 2020-2021, landowners and farmers experienced great losses due to the high costs of fuel and fertilizers, drought, and high production costs. The corruption in the agricultural sector is linked to the illegal access that some individuals in the “Administration” have to subsidized water and farming materials, which forced many farmers to give up their lands to those with the most influence.

And lastly 3 projects took place in the Industrial sector which are:

Several important decisions were made during the monitoring process including the following points:

The monitoring of the AANES region during the first half of 2022 indicated the following:

Based on the analyzed data, it can be concluded that the quality and the size of implemented projects and works in the AANES region indicate a structural inadequacy in the socio-economic model followed. Moreover, the AANES's various institutions and offices dealing with economic affairs did not contribute to the region's recovery or stability— despite controlling approximately 55% of the resources of Syria's GDP.