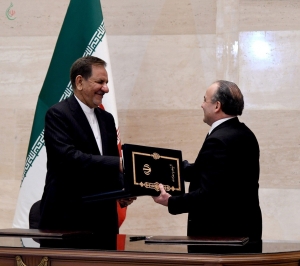 Iran, a major ally and enabler of the Syrian regime, is increasingly engaged in competition over access to the Syrian economy now that there are new opportunities for lucrative reconstruction contracts. This report sheds light on the economic role played by Iran in Syria through its local representatives and Iranian businessmen. It also explores the (limited) impact of the European Union and U.S. Treasury sanctions on Iran's economic instruments in Syria.

Iran has invested heavily in the protection of the Syrian regime and the recovery of its territories. Iran’s main objectives in Syria have been to secure a land bridge between its territory and Lebanon, and to maintain a friendly regime in Damascus. Much of Iran’s investment has been military, as it has financed, trained, and equipped tens of thousands of Shi’a militants in the Syrian conflict. But Iran has also made major financial and economic interventions in Syria: it has extended two credit lines worth a total of USD 4.6 billion, provided most of the country's needs for refined oil products, and sent many tons of commodities and non-lethal equipment, notwithstanding the international sanctions imposed on the regime. In exchange for its commitment to ensuring Assad’s survival, Tehran has expected and demanded large concessions in terms of access to the Syrian economy, especially in the energy, trade, and telecommunications sectors.

Iran has provided crucial economic assistance to the Assad regime in order to prevent its fall and to ensure that it can meet its fuel needs. In return, Iran demanded access to significant investment opportunities in key sectors of the Syrian economy, notably: state property, transportation, telecommunications, energy, construction, agriculture, and food security.

Since 2013, the Iranians have aided Assad through two main channels. First, it extended two lines of credit for the import of fuel and other commodities, with a cumulative value of over USD 4.6 billion. In order to position itself strategically as the lynchpin of the Syrian economy, Iran restricted the benefactors and implementers of these credit lines to its own national companies. It can thus continue to provide the regime with a lifeline in terms of goods and energy supplies, but in return it can control key parts of the Syrian economy.

The following list includes major Iranian companies that have announced a return to business-as-usual in Syria. Each brief overview gives a description of the company’s involvement in Syria, followed by basic information about the company.

Has demonstrated an interest in carrying out reconstruction work on Syria infrastructure.

Khatam al-Anbia Construction Base is involved in construction projects for Iran's ballistic missile and nuclear programs. It is listed by the UN as an entity of the Iranian Revolutionary Guard Corps (IRGC), with a role “in Iran's proliferation-sensitive nuclear activities and the development of nuclear weapon delivery systems” (Annex to U.N. Security Council Resolution 1929, June 9, 2010). The company is under the command of Brigadier General Ebadollah Abdollahi.

Khatam al-Anbia conducts civil engineering activities, including road and dam construction and the manufacture of pipelines to transport water, oil, and gas. It is also involved in mining operations, agriculture, and telecommunications. Its main clients include the Ministry of Energy, Ministry of Oil, Ministry of Roads and Transportation, and Ministry of Defense.

Since the company’s founding in 1990 it has designed and implemented approximately 2,500 projects at the provincial and national levels in Iran. It currently works with 5,000 implementing partners from the private sector. An IRGC official recently revealed that a total of 170,000 people currently work on Khatam al-Anbia’s projects and that in the past 2.5 years it has recruited 3,700 graduates from Iran’s leading universities.

MAPNA is a group of Iranian companies that build and develop thermal power plants, as well as oil and gas installations. The group is also involved in railway transportation, manufacturing gas and steam turbines, electrical generators, turbine blades, boilers, gas compressors, locomotives, and other related products. The Iran Power Plant Projects Management Company (MAPNA) was founded in 1993 by the Iranian Ministry of Energy. Since 2012, the group has been led by Abbas Aliabadi, former Iranian Deputy Minister of Energy in Electricity and Energy Affairs.

In 2015, MAPNA sealed a USD 2.5 billion contract, Iran’s largest engineering deal to date, to supply Iranian technical and engineering services for the construction of a power station in Basra in southern Iraq.

MCI is a subsidiary of the Telecommunication Company of Iran (TCI), which is partially owned by the IRGC. MCI brings in approximately 70 percent of TCI’s profits. MCI provides mobile services for over 1,000 cities in Iran and has approximately 66 million Iranian subscribers. It provides roaming services through partner operators in more than 112 countries.

Iranian Companies Active in Syria in 2019

Table 1: List of all Iranian companies with ongoing contracts in Syria - 2019

Iran and Russia have been competing over the reconstruction of Syria and the potentially lucrative investment opportunities that come with it because both countries hope to recoup some of their outputs from years of supporting the Assad regime and also because both hope to maintain their influence in the post-war era. Both Tehran and Moscow are therefore striving to win over major players in the Syrian political and economic spheres whom they hope to rely on to facilitate their business deals and ensure their respective interests. Consequently, both countries have established economic councils to oversee their ventures and to organize relations with their respective Syrian partners.

The following descriptions of the Syrian-Russian and Syrian-Iranian business councils cover their structures, the total number of members, the most prominent players, and the companies affiliated with their members.

The Syrian-Russian Business Council (SRBC) includes 101 Syrian businessmen and a number of Russian counterparts. It is divided into seven committees covering the main sectors of the economy:

The Syrian membership of the SRBC includes many influential names, as shown in Table 2.

Of these figures, three are particularly prominent:

The SRBC also employs a number of Syrian businessmen of Russian nationality, most notably George Hassouani, who was formerly involved in oil and gas deals with ISIS.

The number of Syrian companies included in the Syrian-Russian Business Council is estimated at 91. These companies are involved in import and export, general trade, textiles, clothing, petrochemicals, energy, and, in a small number of cases, private security operations (see Table 3).

Table 3: Companies in the SRBC 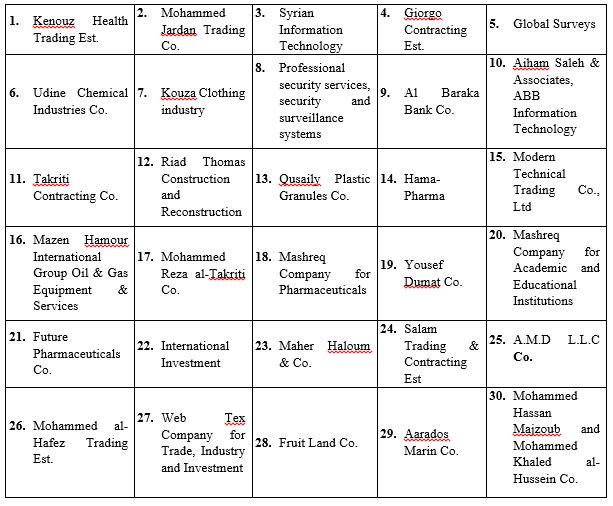 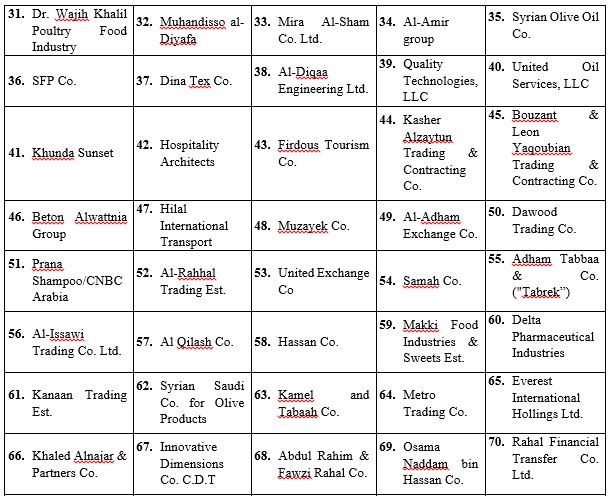 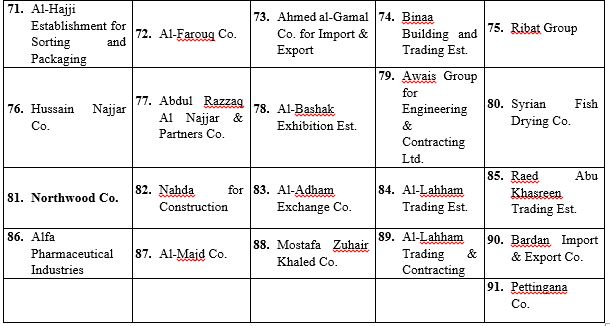 By comparison, Iran has had less success with its business council venture than Russia. The Syrian-Iranian Business Council (SIBC) was established in March 2008, and was initially led by Hassan Jawad. It was reconstituted in 2014 with nine members, as shown below in Table 4.

Table 4: Members of the SIBC

Some of these figures have significant economic influence:

The number of companies owned by Syrian businessmen who are members of the SIBC board is estimated at 10 (see Table 5).

Because of the relatively small number of Syrian members of the SIBC, Iran is making additional efforts to woe Syrian businessmen. According to private sources, Syrian businessmen are seeking contracts with Iranian companies in return for being granted a share of the value of the contract. Table 6 shows key Syrian figures engaged with Iran.

Iran seeks to obtain lucrative investment opportunities in different sectors of the Syrian economy, whether through tenders or monopolies. The main sectors in which Iran is trying to get full access are: agriculture, tourism, industry, reconstruction, and private security.

Tehran’s investment in Syria’s the tourism sector has been mostly in religious tourism. For instance, the Syrian Minister of Tourism signed a MOU with the Iranian Hajj Organization in 2015 to bring Iranians and others into Syria for religious tours. There are now estimated to be 225,000 religious tourists from Iran, Iraq, and the Gulf countries visiting Syria each year, and they bring in around SYP two billion (around USD 3.9 million) in revenue.

The industrial sector contributed 19 percent of Syria’s GDP in 2011, and has suffered losses estimated at USD 100 billion during the war. Iran has several industrial facilities in Syria. These are concentrated in the automobile sector, where they include the Syrian-Iranian International Motor Company and Siamco. Iran has also invested in the glass industry in Adra industrial city. The Iranian Saipa group announced a growth in sales of 11 percent in 2017 in Iraq, Syria, Lebanon, and Azerbaijan. Car sales in Syria reached a significant level: although it was a third of 2018 sales in Iraq so far, 50,000 cars were sold in Syria last year.

Iran has tried to obtain contracts from the Syrian government in the industrial sector, and a number of MOUs have been signed. They include:

In 2018, the Syrian-Iranian Business Council submitted a proposal for the participation of Iranian companies in the rehabilitation of Syria’s public industrial sector. In addition, the Iranian Ministry of Industry has expressed a wish to establish a cement production company in Aleppo as part of the second phase of implementation of the Iranian credit line.

The construction sector contributed 4.2 percent of Syria’s GDP in 2011 and then suffered a losses of USD 27 billion over the next six years. Syrian infrastructure has taken a similarly heavy hit as a result of the conflict, with losses valued at around at USD 33 billion, including over three million destroyed houses or housing units.

Iran’s interests in reconstruction—as with tourism—have a religious tinge and are mainly focused on the areas around sacred Shi’a shrines. For instance, Iran has been asking the Syrian regime for large concessions in Daraya, the old city of Damascus, Sayida Zainab, and Aleppo. Thus far Iran has mostly relied on Syrian intermediaries to purchase real estate, businessmen such as Bashar Kiwan, Mazen al-Tarazi, Mohammad Jamul, Saeb Nahas, Muhammad Abdul Sattar Sayyid, Daas Daas, Firas Jahm, Nawaf al-Bashir, and Mohammad al-Masha'li. Tehran has also relied on Syrian associations such as Jaafari, Jihad al-Binaa, the al-Bayt Authority, and “the Committee for the Reconstruction of the Holy Shrines" to expand and acquire new land in or near the holy sites in Damascus, Deir Ezzor, and Aleppo.

Sanctions against Syria and their Effect on Iran

The ongoing conflict in Syria has prompted international outcry and condemnation, as well as a long list of "red lines" and sanctions. The sanctions currently in place against Syria include an oil embargo, restrictions on certain investments, a freeze of the Syrian central bank's assets within the European Union, and export restrictions on equipment and technology that might be used for repression of Syrian civilians.

The problem with the sanctions on Syria is that they are ill suited to address the situation, in which sanctions are unlikely to work due to the ongoing war. The EU took significant steps very early in the Syrian conflict, essentially deploying its entire sanctions toolbox in less than one year, in contrast to its more common step-by-step sanctions approach. After a few years, the EU realized that this approach was rushed and ineffective and was forced to backtrack on some measures. This learning process showed the EU that an arms embargo is not necessarily the best first way to address a conflict situation.