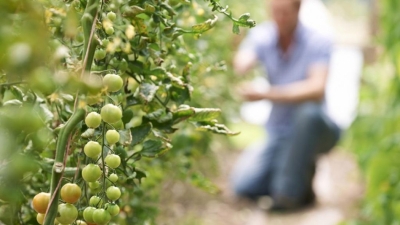 In opposition-held territories, the agricultural sector suffers from a variety of complex challenges. Among those challenges is that supply exceeds demand due to poor planning, absence of refrigerated storage facilities, weak purchasing power, absence -or limited- presence of food production factories, and the absence of export channels. Although some exports have moved from Syria to Turkey, they remain limited in quantity and continuity. Most sellers were left with no choice but to sell their products at unfairly low prices, with a high cost of production and export logistics, leaving them with little if any margins of profit. Such challenges have prevented agricultural production from employing the necessary workforce and strengthening the food cycle throughout the years.  The current governance dynamics prevents farmers from securing effective solutions, and therefore the farming community continues to endure losses. This has drastically affected the development of the agricultural sector within these regions.

The following paper covers some of the agricultural sector's challenges and proposes recommendations to empower its sustainable growth. The outlined recommendations may offer some solutions to achieve the minimum level of recovery of costs and create a plan of action.

The problems faced by the agricultural sector, whether in terms of supply or demand, can be summarized as follows:

Governing bodiesignored the calculations of the absorptive market capacity (demand) of agricultural crops, which increased the financial losses and caused a weak valuation of the sector. For example, based on a 2020 study by the General Organization of the Seed, for onions and potatoes crops, the General Organization for Seed Multiplication estimated the surplus local onions production at 25% and local production of potatoes at 19%. The percentage was estimated without considering the worker's wages, as farmer hardly earns $100 per hectare of onions, while their loss is $1,668 per hectare of potatoes.

In addition to inaccurate calculations, farmers also endure difficulties in exporting produce. Exporting agricultural products from opposition areas to regime-held districts is neither easy nor feasible because of the high transportation costs and bribes to guards at regime-held checkpoints. For example, a kilo of onions in al-Bab area is estimated at the writing of this paper at 200 Syrian Pounds but reaches 500 S.P in Damascus' markets(1) There are also high costs and difficulties in exporting produce from opposition-held territory to Turkey.  In June 2018, the opposition areas exported only 4,000 tons of potatoes to Turkey, even though the local production of potatoes was around one million tons. Among the difficulties is the local council’s low capacity to facilitate exports with Turkey. Usually, Turkish authorities show interest in importing commodities from the opposition area, requesting lentils, chickpeas, pistachios, pomegranates, cherries, potatoes and onions, according to their needs in cooperation and coordination with local councilswho mediate between the Turkish government and local Syrian fermers(2)

Furthermore, current procedures implemented by Syrian Interim Government do not accurately facilitate the market balance between goods imported from abroad and those produced locally. This leads to the dumping of produce by the local market due to imported items creating a surplus in the market. This became relatively frequent after March 2021, when the Syrian Interim Government reduced customs costs for Turkish goods entering the areas of Aleppo countryside through the Al-Salama, Al-Ra'i, Jarablus, Al-Hamam, Tal Abyad and Ras Al-Ain crossings, as the following table shows(3)

It is evident that the agricultural sector is suffering for a multitude of other reasons. These reasons include the negative impact of the industrial sector, high costs of raw material, lack of accessibility to energy sources such as water, electricity, and fuel, the low purchasing power of citizens, and the unstable security environment. Water has become an issue across the region, but Al-Bab in particular, has suffered from lack of water due to the digging of random wells and draining of the strategic water reserves.

Establishing a National Farmers’ Association (NFA) as a First Step

In order to understand the issues and minimize its negative impacts, there needs to be direct communication and support with non-governmental civil bodies in the agricultural sector. Among those bodies are farmer cooperatives. Communication with both official and non-official institutions to create a strategic plan to regulate agricultural production would achieve national interests and local production and agricultural capital sustainability. To achieve that, the area may establish a National Farmers’ Association (NFA) as a non-profit, non-governmental, agricultural association that brings together local farmers’ associations and agricultural societies and unions scattered in the region outside the government control. The NFA would employ experts and build communication networks across institutions and organizations, such as the Directorate of Agriculture in the Syrian Interim Government, the Organization for Seed Multiplication, local councils, and the Federation of Chambers of Commerce and Industry, and relieforganizations. It will also be tasked to develop an integrated plan to help such institutions to better manage the agricultural sector in terms of quantity and quality, supply and demand while adopting a trademark for local agricultural crops, health specifications, and quality management that conform to international standards.

To enhance communications, the NFA may issue quarterly reports that include an economic index to measure the growth of the agricultural sector to enhance the values of transparency.

As shown in the figure below, the NFA would be a public body comprised of farmer unions/ associations from every city and town who select a national entity. This new entity would then establish the supporting offices that include: (1) a Legal Office to consider the affairs of agricultural licenses and property rights, control the investment process, issue instruments, and control violations. (2) Marketing Office promotes products and projects to investors and investment entities, negotiates with governments, and signs memorandums of understanding and work protocols to promote agricultural crops and secure consumption channels. (3) Production Management Office that will adapt the production plan to the market needs of food, industry, storage, export and other needs, (4) Financial Office that will be responsible for the transactions, financial liquidity, and the funding and crediting process. 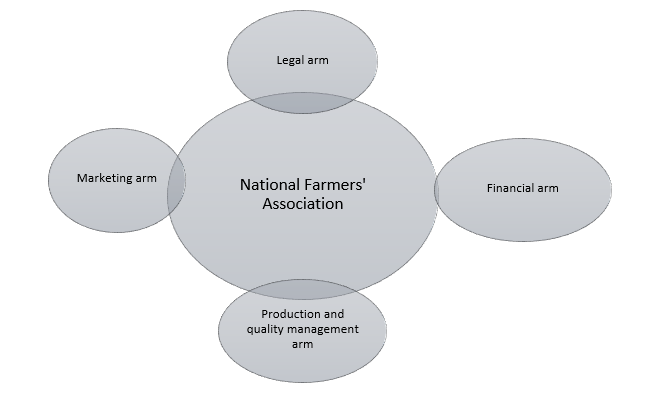 The NFA can preliminarily work in four tracks:

A. Trademarking for Syrian Agriculture

This track includes structuring the agricultural process as a whole and attaining a certificate of confidence from farmers in their willingness to work with the NFA. This process will allow farmers to be included in a registry that will be followed up with regularly.

The other step is to stamp the crop with the NFA's “stamp” to indicate that the product conforms to international health and agricultural specifications. This will enhance the NFA’s control and trust in Syrian communities and abroad.  These two steps will motivate the farmer to return to his land and gain greater confidence in both his/her work and product.

B. Regulation of the production process

The failure to consider the balance between supply and demand has led significant increases or decreases in prices. The NFA would intervene to advance the calculations around production to determine the quantity of production, demand, and whether consumption, manufacturing, or exporting, are the necessary response. Through these proper calculations, the NFA would be better able to manage the production process costs and prevent financial losses for farmers eventually.

Through its reach and capacity, the NFA will be able to issue recommendations on the agricultural sector in Syria to key stakeholders. The NFA would submit recommendations to the Syrian Interim Government, communicating them to relevant governance bodies.  This will help enact protectionist policies that limit the import of any product similar to the specifications of the local one, thus reducing the dumping of local produce and harm to farmers.  Recommendations may include imposing taxes and duties on every imported product similar to the local product. This will protect the local product, raise its competitiveness, and diversify markets.

For the marketing process, the NFA should focus on two aspects: (1) the legal basis of contracts and covenants for agreements between two parties. The agreement documents will be in accordance with the international legal framework, and (2)the NFA will strengthen the assets of power and negotiation with Turkey on imports and exports to and from opposition areas, including the transit of local products through Turkey’s territory for exports abroad.

The lack of financial institutions, such as banks, in opposition areas, has contributed to decreased sources of credit and created a fragile environment for funding and payments.  The exchange rate and prices are constantly fluctuating. The NFA can design a financial program that regulates the credit and funding process based on the environment and situation. This includes signing work protocols with organizations, companies and banks, opening bank credits in Turkey and other countries to facilitate the payment and receipt process, and issuing special farming financial instruments(4) to be sold to Syrian investors at home and abroad with the guarantee of the NFA. The NFA can also direct funds to support the food industries sector and various industries in the agricultural sector.

Although establishing a new body is difficult for the local community, it is fairly necessary. The costs of establishing the NFA is minimal compared to the depletion witnessed by Syria’s agricultural sector. The region will reap the fruits of this work, not only by finding nearby and far markets for selling products but also by increasing confidence in the Syrian product, organizing the production process of agriculture, funding food facilities and factories, enhancing the local supply chain, and finally pushing the process of early economic recovery forward. This will present an opposition governance model capable of creating “stability” within a particular aspect

([4]) Sukuk: Securities from the Islamic Sharia-compliant financing tools. The instrument is linked to specific projects and investment opportunities that are already existed or under construction. The instrument is equal to the value of a share in an ownership, and the holder of the instrument takes profits and has the right to participate in the management, capital, and trading. There are many types of instruments in Islamic Sharia, known as Sukuk (instruments),such as al-Mudaraba, al-Murabaha, al-Istisna’a, al-Musakah, al-Muzara’a, Ijara, services, and others.

السابق The Chain of Command in the Syrian Military: Formal and Informal Tracks