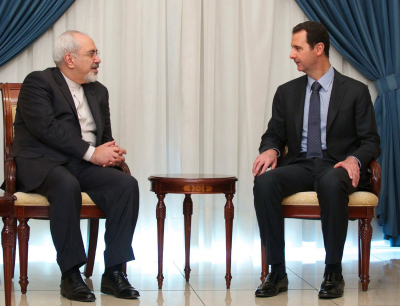 This report is an introduction for a series of reports, which will address Iran's military and economic activities in Syria during 2018.

The current report highlights Iran's most prominent activities in 2017, activities that still have major effects until this date.

Iranian influence in Syria is often reduced to its military support, including more than 50,000 armed militia members.([1]) Iran's Islamic Revolutionary Guard Corps (IRGC) and its auxiliary institutions not only provided military and financial support to the Syrian regime but have expanded their administrative and economic activities in Syria by infusing their institutions within the Armed Forces, service-delivery ministries, local political and armed bodies, and non-governmental organizations. This monitoring report provides an overview of Iran’s illicit activities in Syria during 2017 and early 2018. It provides indicators for its long-term interests and highlights mechanisms that it uses to infiltrate government agencies, the private sector, and society in general regardless of the political outcome of the crisis.

IRGC forces organize their operations in Syria according to five main military fronts:

In addition, the IRGC established military bases in all of the aforementioned fronts to accommodate up to 10,000 fighters who report directly to IRGC command, such as Al-Fatemiyoun, Al-Zaynibion, and Quds Brigade. It supplied these bases with heavy weapons and anti-aircraft missiles. The central headquarters or command center used by Iranian forces is located in a building at Damascus Airport called the "Glass House," where Syrian forces are barred from entering. This has allowed Iranian forces and their bases to receive and store arms and military equipment from Iran without being checked or monitored. Foreign fighters, Foreign fighters, such as those from Lebanon, Iraq, Afghanistan, and Palestine, are not subject to the orders of Syrian generals in the Syrian Army. They are under the command of the IRGC.

The recruitment process of Iranian-backed foreign fighters primarily targets individuals from the Shiite sect. The rise of Iraqi Shiite militias in Syria became more visible since the emergence of Abu Fadl al-Abbas Brigade at Sayeda Zeinab district in Damascus in 2012. The recruitment of Iraqi Shiite jihads took place mainly at mosques and Shiite seminaries under the patronage of Shiite clerics. Later, recruitment shifted to social media. Iran also recruited Afghan refugees from among the estimated three million Shiites of Hazara; less than a million of them held official refugee status in Iran. Others are forced to volunteer to fight in Syria under threat of deportation to Afghanistan.

Although the majority of Pakistan’s population is Sunni, there are several million Shiites who are the target for IRGC recruitment campaigns. Others volunteer to carry arms and die in defense of the Shiite community, the majority of whom are Pashtun from the Parachinar region of Pakistan tribal districts.

Recruitment campaigns are carried out at Shiite holy sites in Iraq, Iran, Lebanon, and Pakistan, in addition to other supplemental online campaigns through social media. Campaign messages tend to focus on the pretext of defending Shiite holy sites and the Shia community. Military training is provided for approximately two months and sometimes for up to six months for heavy weapons training programs.

1.2 Iranian Deployment of Fighters into Syria

Iran has continued its encroachment into southern Syria despite international agreements aimed at curbing its role in the area and despite the latest Russian-American de-escalation agreement signed in November 2017.

Because of their security interests in southern Syria, Israel, Jordan, and the US regard the expansion of Iranian militias near the border with Jordan and with the Israeli-occupied Golan Heights as “a red line,” and thus they require swift military action. Despite this “red line,” Iran has continued to push the limits and expand its presence in recent months.

The province of Daraa witnessed an unexpected increase in conscription campaigns between Iranian and Regime forces during October and November 2017. The IRGC formed Brigade 313 as a new force in Daraa province and targeted young men for recruitment. Within a short period, the Iranian-led 313 Brigade attracted more than 200 young men. Members who were conscripted into the formation were mostly young men from Daraa known to work on behalf of the regime. They were promoting the force because of the salaries and benefits it provides. Enlisting in the army militias takes place at the Brigade 313 headquarters in the city of Izra. New members receive an ID badge with the IRGC logo, ensuring his ability to pass through regime-force checkpoints. Two weeks after joining, recruits were enrolled in training camps in Izra and Sheikh Maskin.

1.3.2 Establishing Al-Kiswah, a new military base in Damascus

The Iranian military established a compound at a site used by the Syrian army outside Al-Kiswah, 14 km (8 miles) south of Damascus. The base lies about 50 km (31 miles) from the Israeli-occupied Golan Heights.

Satellite images show construction activity at the site referenced by the intelligence source between January and October 2017. 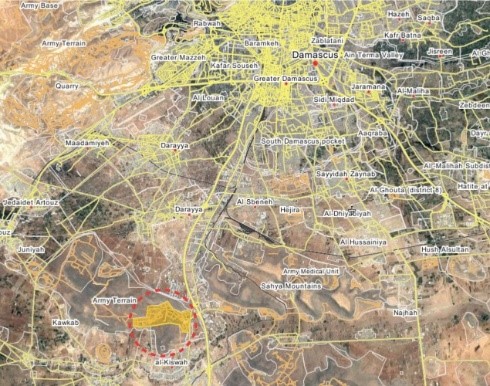 In recent months, additional buildings were added to the site. However, it is impossible to independently verify the purpose of the site and the presence of the Iranian military. 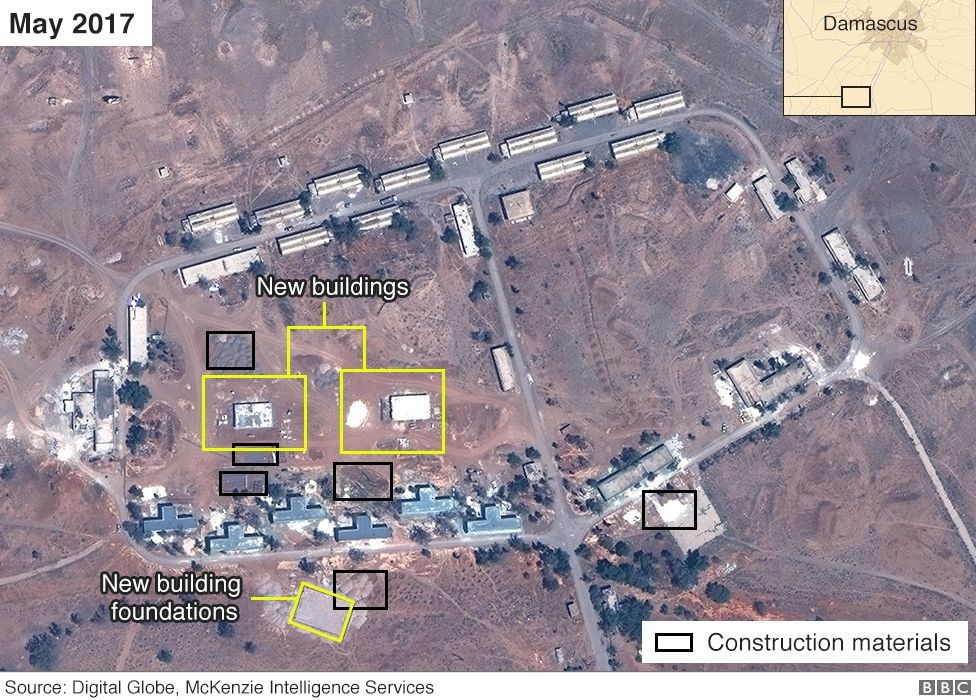 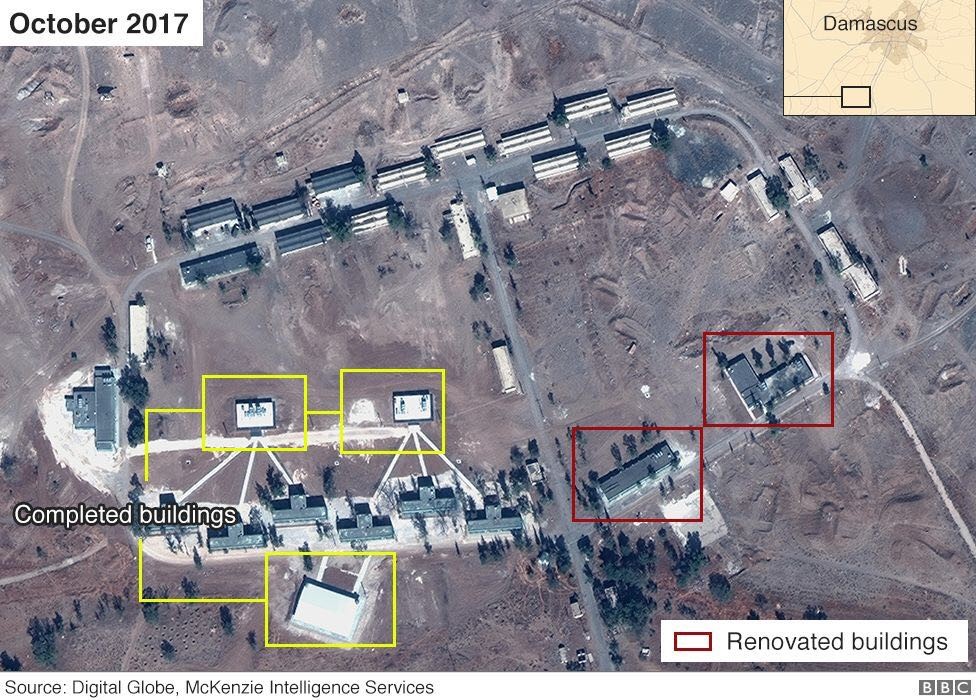 The images of the base do not reveal any signs of large or unconventional weaponry, which means if it were a base, it would most likely be to house soldiers and vehicles. Private sources indicate that senior Iranian military officials may have visited the compound in recent weeks. The images suggest that the facility is military in nature with several garages that can hold six to eight vehicles each.

New buildings were constructed and other buildings renovated in the past six months, although the exact use of the new structures cannot be determined. It is also not clear whether the facility is currently occupied. Shia fighters from other countries, including Pakistan and Afghanistan, are also alleged to be operating in Syria under the control of the IRGC, and it is possible they could use the base.

From the number of buildings and the size of the base, the estimated number of troops deployed there is around 500.

Established in 2003 by the Badr Brigades, this faction is the paramilitary organization of the Islamic Supreme Council of Iraq (ISCI), a Shia Islamist party. Its leader is Hadi Al Amiri. At present, it is not only a military organization but also a political party with 22 seats in the Iraqi parliament. Its military units comprise 10,000-15,000 trained fighters. Its units were spotted in every PMU operation against ISIS.

This organization was formed in 2003 as a resistance movement against the US invasion of Iraq. It is led by Abu Mahdi al-Muhandis and has up to 30,000 troops. Its fighters also support regime forces in Syria.

This is an armed wing of the Iraqi Islamic Movement that was formed in June 2014 in response to ISIS aggression. It is led by Shibl al Zayd who earlier fought in the Mahdi Army under the leadership of Moqtada al-Sadr. This group stands out because its membership draws from the Christian group the Spirit of God Jesus Son of Mary Battalions. Its units participated in operations to recapture Palmyra, in battles for Tikrit, and in the siege of Mosul.

It was formed in 2013 in response to the war in Syria after a dispute with the leadership of Asaib ahl al Haq. The two groups still maintain close ties and often cooperate on the battlefield. It is led by Sheikh Akram al Kaabi, whose ideology is consistent with that of Ayatollah Khamenei.

[He] confirmed that the Lebanese Shia movement Hezbollah, which is actively fighting ISIS in Syria, would be equipped with the best weaponry despite the circumstances, “Hezbollah needs to remain armed in order to fight Israel, Lebanon’s enemy. Naturally, they need to be equipped with the best weapons in order to protect Lebanon’s security—this matter is non-negotiable,” he stated. Jafari also added that Tehran would put substantial effort into the ceasefire to end the war in Syria.

Abdullah Abdullah, Head Chief of Afghanistan’s National Unity Government, said on Monday, November 27, at a meeting of the Council of Ministers in Kabul, “The Afghan government's policy of fighting Daesh (ISIS) is clear. We do not support the presence and participation of Afghans in the war in any country. Hussein Mortazavi, the administrator of the Afghan presidential representative, said: “We are opposed to any proxy war in other countries.” 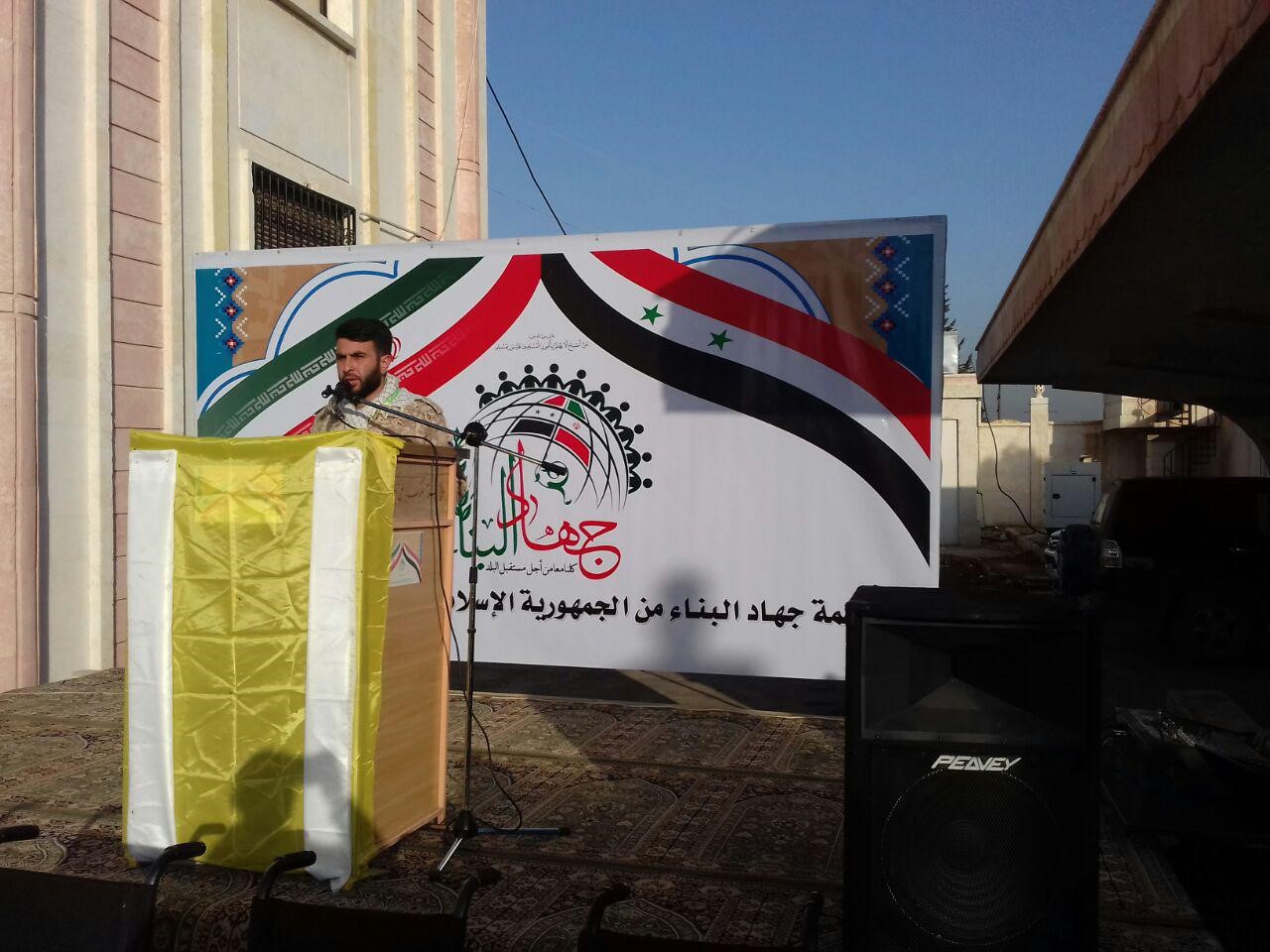 Representatives from Iran attended the ceremony and also Aleppo government and several of military leaders from SAA. 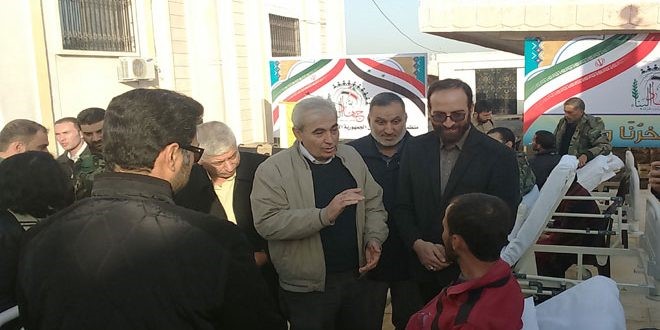 2.3 Establishing a New University in the City of Aleppo

Iran and Syria signed a memorandum of understanding to establish a branch of Islamic Azad University in the city of Aleppo. A deputy head of Iran’s Islamic Azad University, Saleh Eskandari said, “Syrian President Bashar Assad has welcomed the plan to establish a branch of Islamic Azad University (IAU) in Syria.” Assad has called on the related officials, including the board of directors of Iran’s IAU, as well as the Iranian Embassy in Damascus, to pave the way for the establishment of the university after ensuring legal arrangements with the Syrian Ministry For science, he added. Outlining the details of the MoU in a Farsi interview with Fars News Agency, Eskandari also noted that the MoU was signed at a ceremony attended by Ali Akbar Velayati, an advisor to Iran’s leader, who was visiting Aleppo to lead a delegation.

2.4 Reactivate the Triangular Electrical Line between Iran, Iraq, and Syria

A joint meeting of the Syrian, Iraqi, and Iranian electricity ministries was held at the Iranian Ministry of Energy in Tehran to sign a protocol to reactivate the tripartite electricity link between the three countries. The first line will be connected to 400 kV / 155 km, of which 25 km from Al Qaim station to the Iraqi-Syrian border, 130 km in Syrian territory up to Al Taym station and the second line 230 KV 42 km through the Syrian Swedish stations and Tel Abu Zaher.

The Chairman of the Russian State Duma Committee for International Affairs, Leonid Slutsky, announced today (Monday) December 4 that the committees of the Duma and the Iranian parliament would meet to discuss the reconstruction in Syria.

According to "Sputnik" Russian, Slotsky pointed out that the parliamentarians gathered to discuss the activities of "Shiite police" in areas where there is a population of the Shiite community, as he put it.

The Minister of Public Works and Housing in the Syrian regime, Hossein Arnous, announced large cooperation agreements between Syria and Iran in several areas, notably reconstruction. 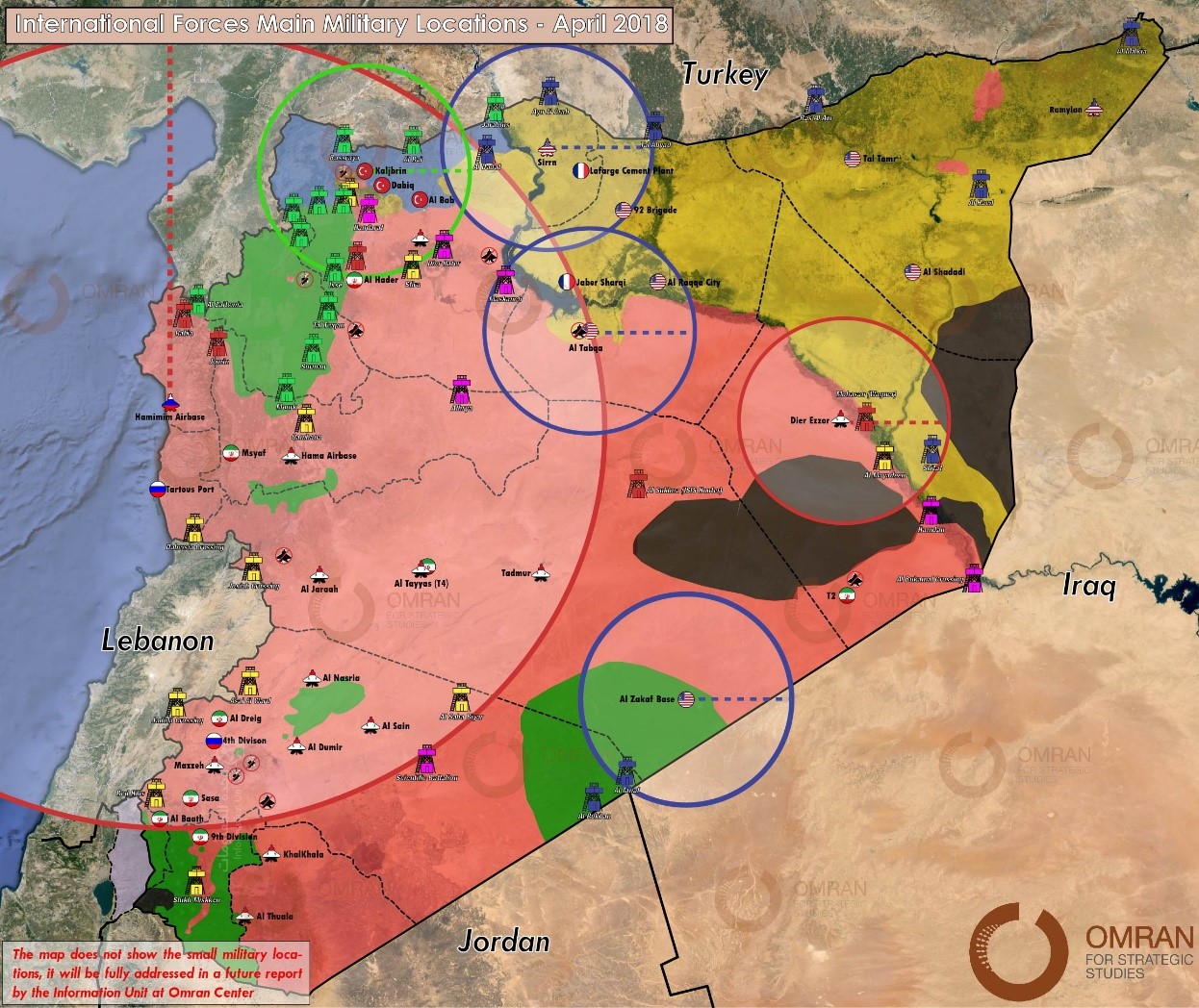 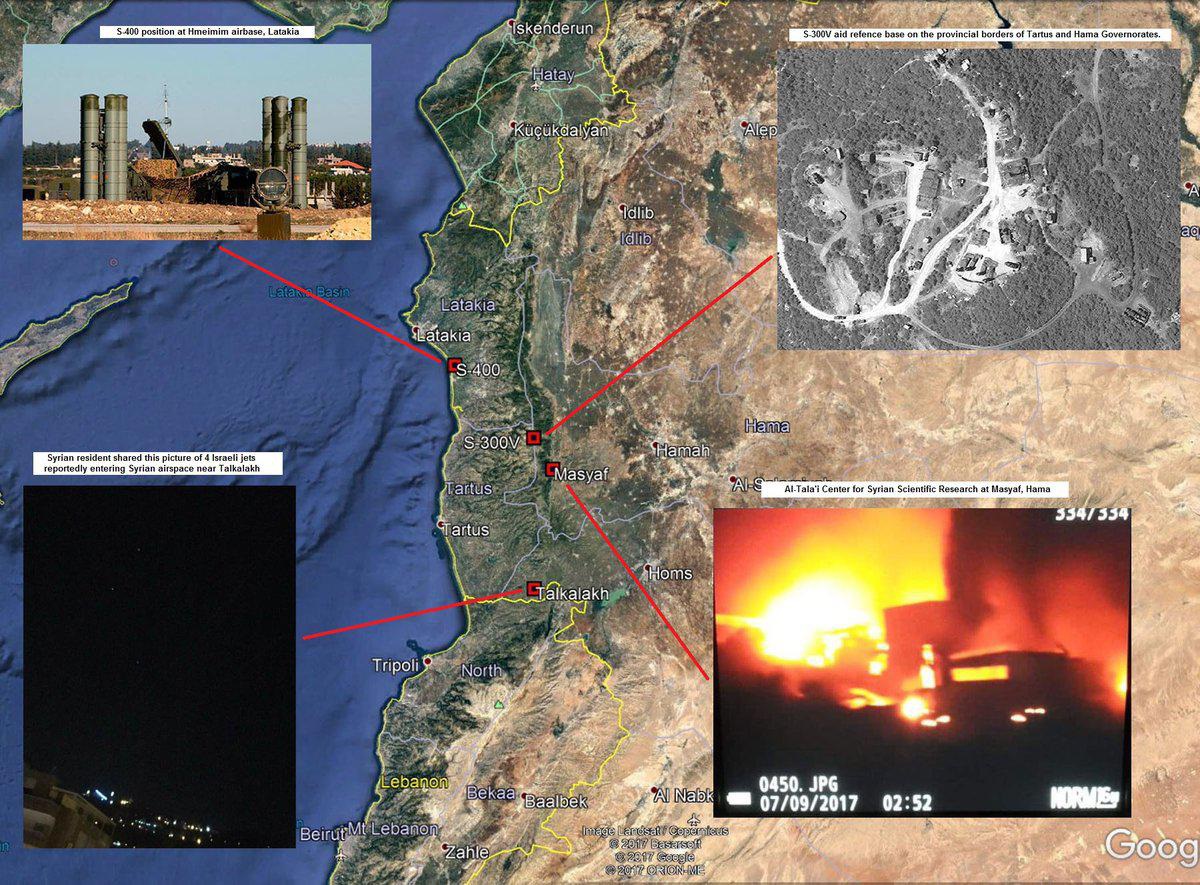 The Scientific Research Center in the city of Musayaf was targeted by an Israeli air strike on 7 September 2017. The entry of Israeli aircraft was from Lebanon over Telaklakh, and the Russian S300 system was only 15 km away from the target area and 60 km from the point where the aircraft entered. 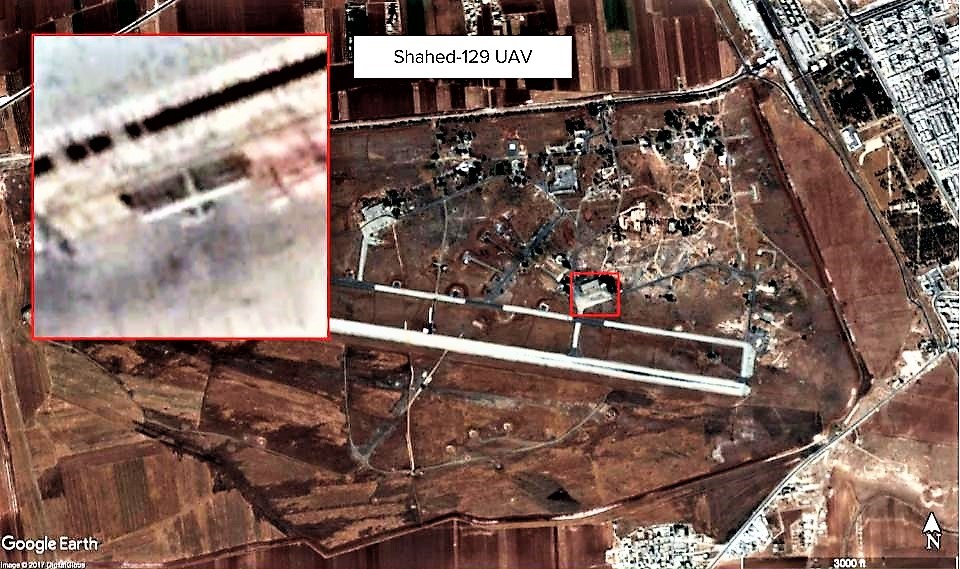 On the same day, the city of Khan Sheikhoun in Idlib was hit by a drone strike. An inside source confirmed that the Iranian drone took off before the hit in 30m.

3.2 Videos of Iran and Its Militias Military Involvement

-       6 December 2017 - According to the pro-opposition TV Channel Jisr, 400 Hezbollah militiamen have reached Baath City in Quneitra and taken positions in government buildings and several military positions in the area- https://goo.gl/wY5FXo

-       7 December 2017 - Video of Hezbollah and allies operation against ISIS in Shayir and Ghabrah in Eastern Deir ez-Zor - https://goo.gl/WwDmBP

([1]) The Number is a result of analyzing Footage and Videos of these groups along with information from private sources.

([4])Basij is a voluntary militia organization established in Iran in November 1979 by Ayatollah Khomeini. The official name is Besic Resistance Force. Basij is now a subordinate of the Iranian Revolutionary Guards