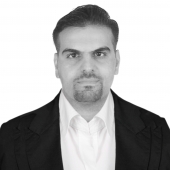 Ayman Aldassouky is a researcher at Omran for Strategic Studies. He is currently a Master student in International Relations at Gazi University. His research is concentrated on governance and local councils, Jihadi Movements, and the relations between states in the Middle East. He previously worked as an executive researcher at Orient Center for International Studies between ‘’2009-2010’’, and a researcher at Sham Center for Research and Studies since its establishment in 2012 until 2014.

The Role of Jihadi Movements in Syrian Local Governance

The Political Role of Local Councils in Syria - Survey Results